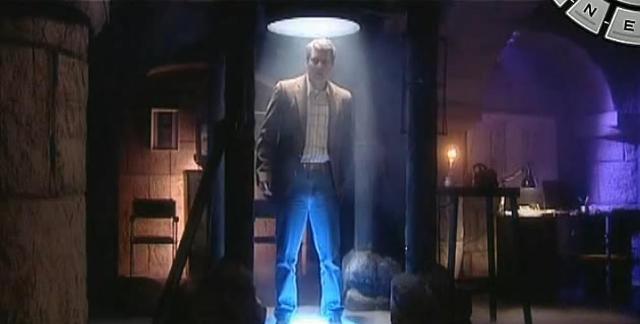 The setting for the 1st person perspective FMV adventure Yoomurjak’s Ring (2009) are the real-life environments of the town of Eger in Hungary featuring the talents of notable Hungarian actors.

The protagonist of the story, following the break-up of his relationship, is New Yorker Jonathan Hunt who on the death of his mother decides to visit her birthplace in Hungary & make a new life for himself there.  He’s motivated by a book called The Stars of Eger given to him by his grandfather but more of interest are 2 letters tucked within it written to his great grandfather from a scientist called Pal Abray who had claimed to have invented a time-travel device.  It seems at the time that it was scoffed at by the scientific community but of interest to politicians

Jonathan early on in the game after trying to track down descendants of Pal Abray meets an elderly man who dies shortly afterwards but whose own grandfather was an assistant of Pal Abray & disappeared after he apparently time-travelled to gather historical info for The Stars of Eger.

Most of the game is investigative (with no time-travel involved), incorporating a lot of history & with what I found to be quite challenging puzzles. I liked the way that the notion of time travel stood out in a seemingly ordinary world - Jonathan does of course go on to discover the truth but of course if politicians were already aware of the theory you can be sure that other people are so you know that there’s going to be some adversity!

N.B I forgot to mention that I thought it was an excellent game but only available as a download in Hungarian with English subtitles & there’s an encyclopaedia that can’t be accessed in this version!

This is one of the better FMV games. The story is fun to follow, the town of Eger is lovely, and I thought the two main actors were excellent in their roles. I enjoyed the Hungarian voices—they added to the atmosphere.

I agree that some of the puzzles are very tough.

I think this is possibly my favorite FMV game. Wonderful stuff. The Hungarian definitely made it feel like being there, something GK2 could have learned from (had it been made in 2010).

I want a sequel!

Played the demo and liked it. Don’t know why I never bought the game.

This game seems awesome, I really have to play it some time. I love FMV and the cheese it serves, even when the game itself is bad. Nostalgia reasons, most likely. And here is a FMV game that’s actually considered good...

With no doubt, one of the best FMV games ever made. The main 2 actors are very good, the fact that is spoken in hungarian gives more authenticity and realism to the game. A very well done game that every adventure gamer, specially those who like FMV, should try.

Stop buying games and get back to the TWW CP! You still haven’t found all 112 easter eggs in Chapter 1.

Stop buying games and get back to the TWW CP! You still haven’t found all 112 easter eggs in Chapter 1.

No, wait, there’s still time to find 112 easter eggs AND to finish Yoomurjak’s Ring while the second chapter of the playthrough begins!

In my mind the game is as good as GK2 & well worth playing - it has a lot of charm but for me the characters are not as charismatic as some of those in GK2.

Also, I for got to mention the YR is more ‘puzzle’ puzzle orientated as opposed to GK 2 that I remember for the most part having more inventory type puzzles?