Hello! My name is Brad L. McAtee, and I am both the writer and gameplay designer for the upcoming adventure game title “Norse Noir: Loki’s Exile”. 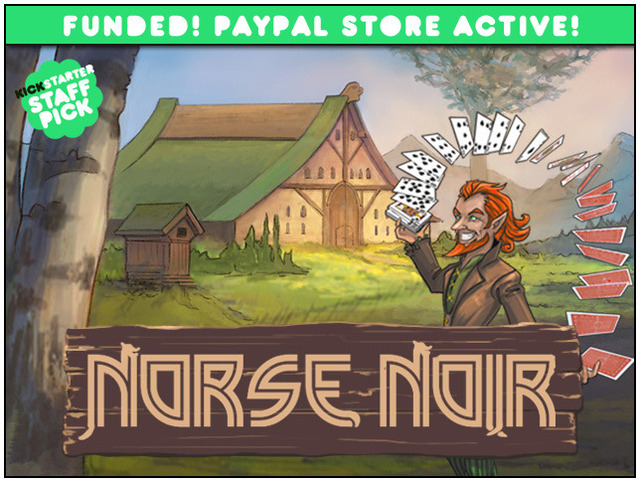 Loki’s Exile is the first in a planned series of episodic titles that combines elements of the pulp detective/big band era of the 1920s US with classical Norse mythology - A combination that’s made more than a few people do a double-take but trust us when we say it makes sense in our heads. 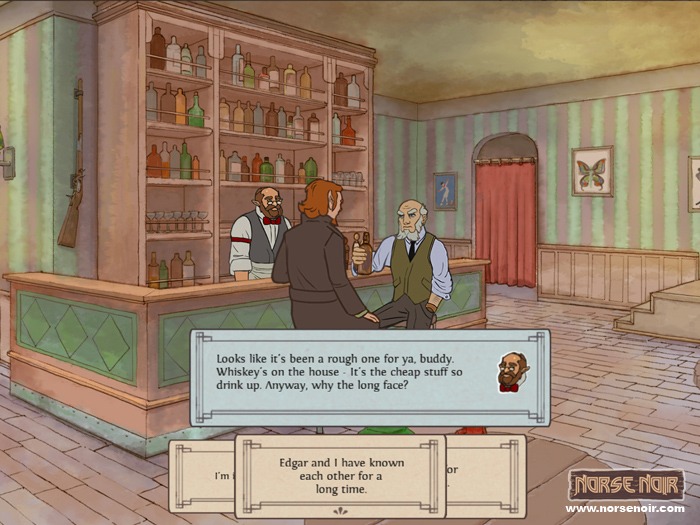 For Norse Noir, our goal is to make an homage to the classic titles we on the team grew up playing, with an art style that attempts to pay homage to the art deco style of the era, while also throwing in our own unique touches.

In the game, your main character is one Lars Kristiansen, a Norwegian street magician and immigrant to the United States who’s fallen on hard times. Formerly a low-level courier and ‘gopher’ for the local mafia, Lars was once well known for his luck and skill at evading the police, but with the disappearance of his former ‘boss’ Lars has fallen on harder times.

Starting out tied to a chair in the back room of a mafia den the game opens with Lars in hot water, as the new leaders of the city’s underworld have decided to cash in on an long-standing debt Lars is vastly overdue on. Told he has three days to scrape up the money or “else”, Lars must make his way around the city and do whatever’s necessary to make cash and keep his feet from a pair of concrete boots - Even if it means occasionally slipping into the grey side of morality. 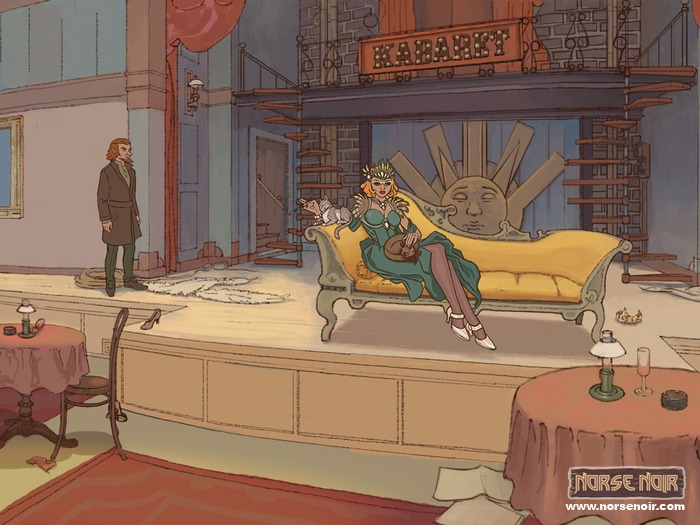 When Lars stumbles across a mysterious pendant, though, his life and world suddenly take a turn for the weird, seeing odd reflections in mirrors, experiencing strange flashbacks, and even hearing a voice in his head that he isn’t sure has his best interests at heart.

Now public enemy #1, Lars must turn to whatever measures he can find and whatever friends he has to solve the mystery of the pendant and the strange visions he’s experiencing, or else things might just turn out a lot worse than he thinks… 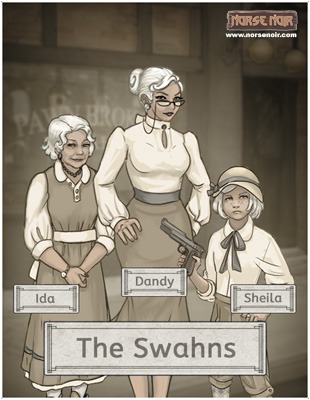 As said above, Norse Noir: Loki’s Exile is very much a love letter to classic games we grew up playing. In that we’re making what is at heart a simple, easy-to-play, traditional adventure game with heavy focuses on both story and logical puzzle solving (IE: no friggin’ pixel hunts, no puzzles that don’t make at least some sense). Where we want our game to shine is in its art and its story, and will be presenting those things at the forefront of the experience over attempting to push the bar via gameplay mechanics (IE: no friggin’ QTE/combat sequences).

We’ve been hard at work on Loki’s Exile since February of this year, and are really proud of the progress we’ve made so far. All screenshots shown on this page are taken in-game, and the only modifications done to them have been to add some shadows underneath the characters; we’re still working on that bit of our code base, and otherwise have not doctored or modified these screenshots at all. A ‘pure’ in-game screenshot can be found below, missing the shadows mentioned above. Please note that we are still working on implementation for our GUI/inventory bar/cursor/etc., and these should be considered placeholder. 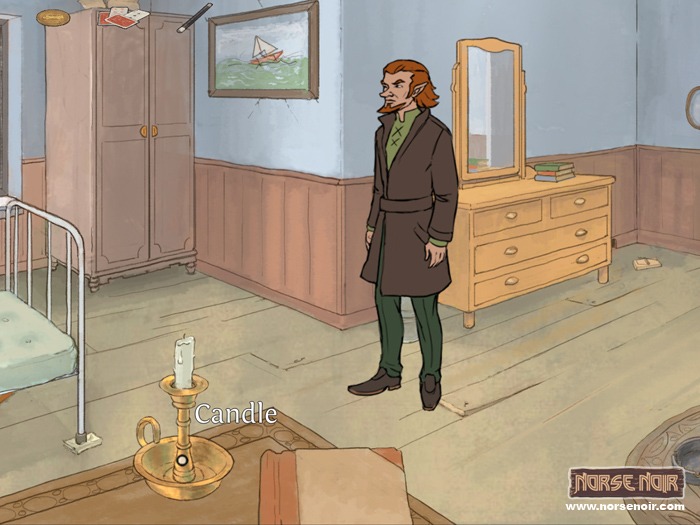 Our funding goal on Kickstarter is low because we’ve reached a point where we just need enough to finish the game and round out the rest of our budget; currently about the first 35% of the game is complete in all aspects, with art completed for roughly 70% of the game, and we feel we can finish the needed work ahead if we make our Kickstarter goal. We also have hopes that we can look into stretch goals for things such as voice acting, but are currently focused on making our minimum funding amount before thinking too far ahead.

I and the rest of the team all hope you’ve enjoyed this look at our title, and we would love your support on Kickstarter. As of right now we’re closing in on the half-way mark for the project and every bit of help we receive really counts. Even if you can’t back right now, there’s still a way to show your support for the project, and even win some free swag:

To enter the contest, simply follow us on Twitter @NorseNoir, and retweet our contest announcement found here - Backing the Kickstarter is NOT required to enter. Prizes are one in-game appearance given out each week (first winner is today!) and one grand prize of a hand-drawn background from the game by lead artist OJ Kiellend, who’s responsible for all the backdrops in our title - You can see more of his work for the game by reading our blog entry “Scenes from the City”, which has several of the backdrops from the game available for viewing.. For full information and rules you can visit the related update on our Kickstarter page.

If you’ve managed to make it this far through the wall of text I sincerely thank you for reading - I’ll be continuing to hang around here and am more than happy to talk about the game, team, or whatever else happens to come up. Again, our thanks for checking us out - Cheers!

Good timing, I had just backed this project, good luck!

thought I can’t enter the contest.

You’re more than welcome to enter the contest if you’ve backed the project - It just isn’t a *requirement*. If you have a Twitter account then you’re free to enter. =) And thank you for the support!

Sure looks like you’ve got yourself a neat combo there!

Best of luck with your KS. Times are rough for PnC’s on KS right now but you’ve got a nice simple pitch and a modest goal, I think your chances are pretty good if you keep on pushing it like this. Don’t give up. The adventure gaming scene needs more original crazy ideas like these.

Like I said in the other thread, I really like the theme, and the game looks very inviting otherwise too. I also consider 8$ to be a very modest price for it, so I might indeed stretch a bit here again. Definitely will be helping in the end push at least if one is needed.

Thank all of you for the kind words and the support, sincerely - We just broke $5000 and the half-way mark this morning, and it wouldn’t have been without the help of people here on the AG forums, so we really are grateful for the support everyone here has shown.

We put up a new update yesterday featuring a video with narration from our character artist & animator Freya Horn, detailing some of the processes and inspiration of our art team that I’m sure someone around here would find interesting; also, seriously, check out our Twitter contest - As of right now your odds of winning one of the remaining prizes are probably a *lot* better than you think.

Again, thanks to everyone here for their help, both in backing us on Kickstarter and in spreading the word about our game. Even if you can’t afford to pledge now, please visit us on Facebook, Twitter or our official blog (see my sig) and let other people know about the Kickstarter - The more news spreads, the more likely we are to make our goal, and having the help of such a dedicated community like this one is the best thing a small team like ours could ask for. =) Cheers!!

Hi gang! I hate to double-post but we’re entering the last few days of our Kickstarter and I wanted to come over to not only thank everyone again for their support, but show off a few of the things we’ve had happen since our last post here on AG.

Most excitingly we’ve hired a new team member for the project, Marie Therese! Marie will be working on character concepts and animation for Loki’s Exile, and brings a ton of experience with her to the team in both fields. We posted an update detailing a bit more about Marie Therese’s work history and experience, and are also very happy to show off her first concept, that of our main character’s best friend Remy. 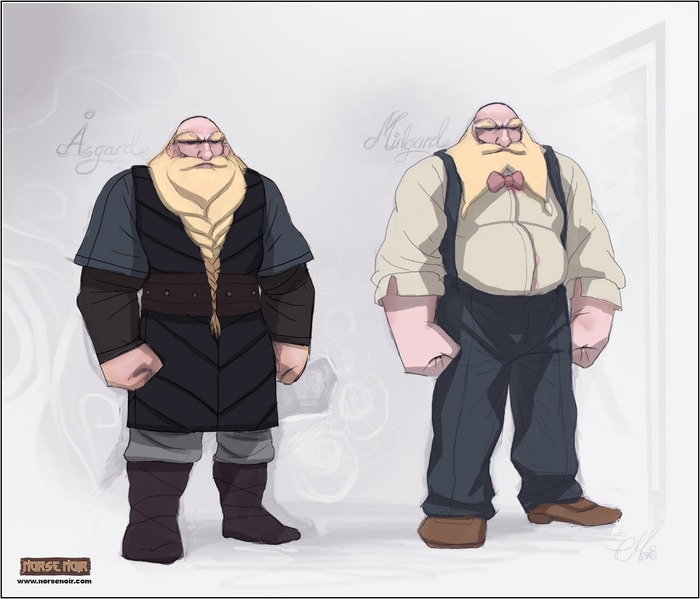 The resemblance to that Thor fellow standing next to him is uncanny, really.

We’ve also started up our Steam Greenlight campaign, which is well underway and going quite swimmingly. Every vote counts so please drop by and give us a click if you’d like to see our game on Steam.

Our lead artist Ole Jacob Kielland released a timelapse video recording of him working on the first of our Asgardian locations for the game, Thor’s Stables. Even though I’ll admit to a bit of bias I really think it’s an awesome video, and goes a long way to show the artistry that he puts into his work. The soundtrack to the video also features tracks from our game, as done by composer Jon Helmer Dahl, and we’re really proud to feature his work in this video.

And lastly, just because we can, have an animated image of one of our locations in game (work still in-progress):

We’re closing in on the last few days and, while I won’t say we aren’t a little nervous about meeting our goal, we still have hope that we can make up the final few bits of our funding before the deadline. Either way it goes, we want to offer our sincerest thanks to everyone here at AG who’s supported us, both via backing our project and helping spread the word - The more people that know, the better our odds of getting funded, so cheers to everyone here for giving us a place and platform to show off our title. We’ll do everything we can to make sure it isn’t the last you hear from us. Thanks again! =D

I put in my measly 10$, can’t really afford a lot now. Hoping there will be a good final push for the last 2k+. It’s still looking pretty good.

I finally created a KS account so I could back this and some other stuff. Congrats for being one of the first things I back! I realize my tiny contribution does very little, but at the very least, it bumps this thread to the forefront again.

And it’s done! Congratulations And probably that epilogue scene scretch goal will be reached by the end of kickstarter.

We’re all really busy and swept up in a flurry of excitement but I wanted to come over here and say thank you, from me and everyone else on the team. Getting the adventure gaming community behind us and on our side is what made this happen, and it wouldn’t have been possible at all without the support of places like the AG forums. We’ll come back and post more once the rush has died down a bit but again, from all of us to all of y’all - THANK YOU!!! =D

Congratulations, Brad!  I’m so excited and happy for you!