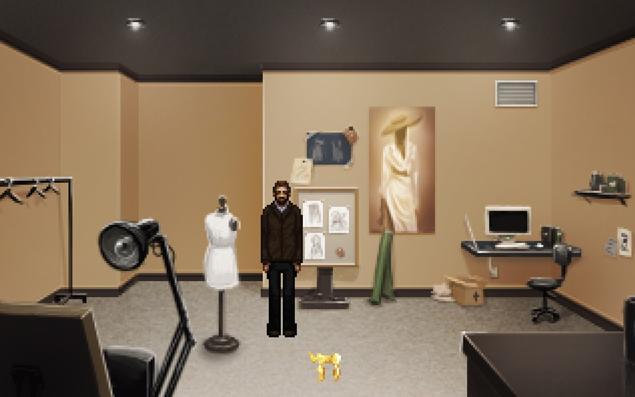 Here’s a screenshot of one of the few locations in The Shivah (Kosher Edition 2013) an enhanced version of the original released in 2006, the title referring to the Jewish period of mourning.

The game is very short & fairly simple but I was grabbed by the story from the beginning. Suspected of his murder the disillusioned Rabbi Stone sets out to investigate why a man he fell out with years before has left a large sum of money to him.

The game is superbly voice-acted & I enjoyed the brief trip into the world of Jewish culture & humour. Even more interesting was the moral dilemma faced by a religious leader questioning the dogma of his faith.

I played one of the Blackwell games with ghost Joey and didn’t much care for it. But this Wadjet Eye game sounds interesting. I should give it a try.

I heard about The Shivah long time ago, but I didn’t know there was this enhanced (“kosher” - ha!) edition.
Thanks, Chrissie.

The game lasts about 1.5-2 hours and has only a couple of puzzles. I like how varied the gameplay is for such a short game, but overall it’s too basic, and writing is pretty weak compared to later Wadget Eye. It’s weird to me that it receives so much praise. Even RPS gave it a very favourable review. A Catholic priest in search of his faith would’ve been a much more controversial subject today.

I played one of the Blackwell games with ghost Joey and didn’t much care for it. But this Wadjet Eye game sounds interesting. I should give it a try.

Did you only play the first one? They get better with each game, you could try another one.