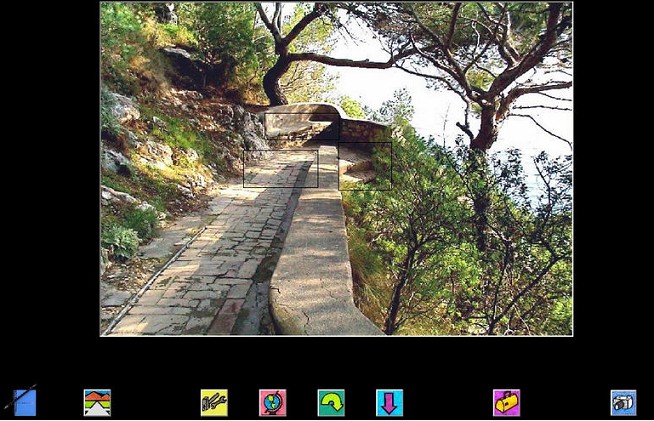 Indie game A Quiet Weekend in Capri (2003) is such a beautiful, relaxing slideshow that I’ll forgive it most of its flaws.  It was annoying to get lost countless times, but the natural beauty of Capri, tourist attractions, villages, sounds and music were immersive enough to make up for the terrible road map and the fetch quests I could have done without

Are these Capri games better or worse than Carol Reed games?
What’s better? What’s worse?
In your opinion.
If you have played any of the CR games.

I’ve played 1 and 2 and enjoyed them both immensely, even though I didn’t finish either.  Just couldn’t stand getting lost constantly.  They tugged at my tribal memory and made me long to be there so much that I had the eerie feeling I had been.  (But then I felt the same way with GK2 too, although I actually HAD been there}.

Karlok is right, the fetching becomes tedious. I could never find the right door and was usually distracted by a beckoning lane I hadn’t explored before and eventually forgot what I was about.  All that aside, I keep meaning to get back to them someday when I’m feeling particularly nostalgic and would recommend them to anyone.

As far as the Carol Reed games which I also love, the latter are much easier since there’s no chance of getting (very) lost and they play much faster.  Plus there’s the interactive map which is more helpful.

The screenshots are so vivid, that if I don’t go to sea this year, I’ll just play one of the Capri games and occasionally pour my head in the plastic water basin filled with water and a kitchen salt.

Like Dara said, the main difference is that the Capri games are really huge, and I mean huge. The developers took a staggering number of photos. The first version had very few save slots and only one or two points on the map you could “jump to”. More saves and points on the map were added in a later version. Finding your way in the sequel Anacapri is easier, but getting lost is still an integral part of the experience.

Other differences with the CR games: A Quiet Weekend in Capri is not as linear and the puzzles are much harder. I needed help quite a few times. But Capri and Anacapri are also different in some aspects. The puzzles in Anacapri are easy, I solved everything by myself. The story in Anacapri is more complex and more interesting.

Are these Capri games better or worse than Carol Reed games?
What’s better? What’s worse?
In your opinion.
If you have played any of the CR games.

The Capri games are better. They give you more to think about, more challenge. The Carol Reed games do not have enough meat for me - nice scenery but they are fluffy “slideshow games” in the real sense, made for retirees and mothers on maternity leave.

I agree with Karlok about getting lost - get lost! It’s part of the game. I found Quiet Weekend confusing at first - terrible map and backtracking but Anacapri was a joy to puzzle through. If Capri Connection improves as much as Anacapri did, we’ll have a real masterpiece on our hands.

Thank you all for the info & your opinions!