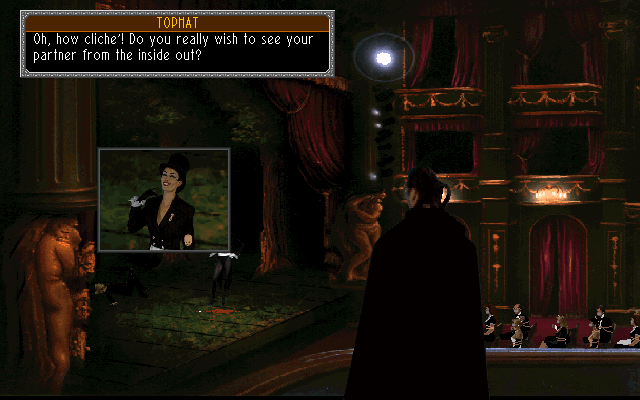 I’ve been meaning to give Noctropolis, a game about a guy who becomes the superhero from his favourite comic book (?), for a while, but I keep forgetting about it when I actually have some free time. Any opinions?

(I’ve just discovered that it was designed by Brent Erickson, who was co-designer/writer on the early Access Software games: Countdown, Mean Streets, Martian Memorandum… I haven’t decided yet if that’s a good or bad thing.)

K, as I’ve said elsewhere in other threads, Noctropolis is a much under-rated game, particularly given when it was released. The storyline is pretty well thought out if a touch cliched. The overall level of acting is acceptable (not perfect and, in a scene not far on from your scene, rather nonsensical) and the puzzles, mostly, inegrate reasonably well. The biggest problem with the game is the absolutely naff ending. If the game should ever be remade then that ending has to go. I said elsewhere that if it had beem a book even a novice, just started, first manuscript worked on, editor would send it back saying “you’ve got to be joking! Rewrite or it’s not being published.”

But definitely worth playing.