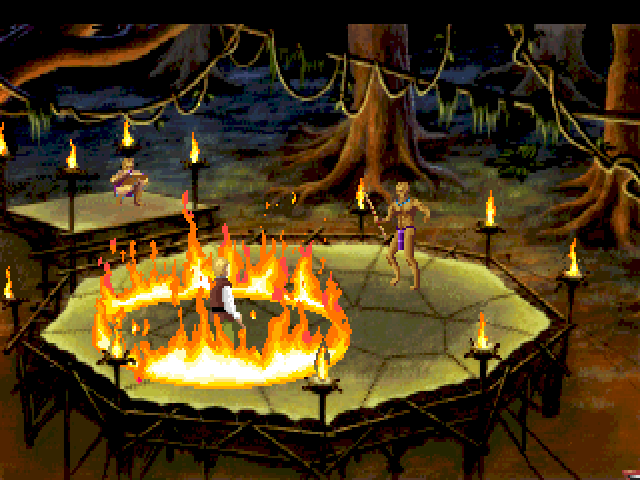 Quest for Glory III was probably the easiest and weakest of the series (though definitely also the smoothest introduction to it), and thieves really got short-changed, but magic users got a really nice magic duel!

So, is this one the best to start the series? I’m planning to play some of them this year for the first time.

Is the story between the various games related?

That’s a difficult question. The problem with the QfG games is that they often offer very little guidance as to what you’re supposed to do. And if you add that to the fact that they’re unsettling already because they’re not typical adventures nor typical RPGs, it can be a very difficult experience at first. Like being thrown into the deep end of the swimming pool and told to figure out how to swim—most people will just drown.

That’s why I tend to think that 3 is a good place to start: you always have a clear objective, you always know where you’re supposed to go and why. So that leaves you free to figure out how the whole adventure/RPG mix works. The game’s problem is that not only does it tell you what to do, the majority of the quests are boring fetch quests (go from A to B, killing some monsters along the way, get item, go back to A, give item, move on to next quest).

My personal experience was:
- #2 with my parents, we got hopelessly confused and gave up quickly (also the RPG elements are not fun to play as a group)
- #3 on my own, got me hooked
- #2, this time I finished it
- #1 (remake)
- #4 and then #5, with numerous replays of the earlier games while waiting.

So you see, it was a bit of a mess for me. But that didn’t prevent me from loving the series.

There are definitely story connections and references between the games, and clearly some spoilers for earlier games here and there (the worst offender being the QfG3 intro which replays the final confrontation from QfG2), but that never ruined the games for me. They’re more about atmosphere and characters and gameplay than plot anyway.

So, to get back to the original question: where to begin?

- Maybe #1. The design can be a bit unforgiving, and there’s more emphasis on grinding your skills than in later games (boooring). And the fighting system is badly broken (in both the original version and the remake). But at least the game offers some general guidance: you have some main objectives (even though you don’t know how to achieve them), and so you can start exploring the valley (make a map as you go along!), get quests, and start connecting the dots.
- Certainly not #2. For the first few days, you have absolutely no idea what you’re supposed to be doing, and you’re just exploring this big city with its sprawling network of winding streets and you just keep thinking that you’re doing something wrong. It’s a fantastic game, with great atmosphere and characters, but in my experience a terrible starting point.
- #3 worked for me.
- Not #4. The whole point of the game is that it’s extremely unsettling: you’re lost in a strange place, you have no idea what to do, no one knows you, no one likes you… Great world, great atmosphere, best characters of the series, but the whole point is to demonstrate how much you and your character have grown, so don’t start there.
- #5 should be kept for last, since it ties together so many elements from earlier games. The final pay-off is disappointing (they ran out of time and money), but it has the strongest gameplay of the series (both on the adventure side and RPG side). Some people have an irrational hatred of it because it looks different (where’s my beloved SCI engine?!!??); they’re morons.

- Maybe #1. The design can be a bit unforgiving, and there’s more emphasis on grinding your skills than in later games (boooring).

This actually answers a question I asked here a little while ago. It might make me give the other 4 games a chance sooner rather than later after all. That was a valuable PSA, Kurufinwe.

Thank you for the guide Kurunfinwe. I think I’ll actually start with 3. Before getting the collection recently I’ve only owned 5 and tried to stsrt a few times but was a bit lost. I’ve always wondered how the adventure/rpg mix played, I don’t think there are many games like it.

Does anyone know if QFG 4&5 from the GoG collection includes the voices?

That promises to be the mother and father of all threads!

That promises to be the mother and father of all threads!