It was pretty “meh” to be honest. Did you try it?

The general components are there, but the writing is just not good, and there’s lots of very rough, raw “indie” moments to it. Like the game refusing to let you out of the location until you check everything the game wants you to check, or many items/things you can point at (since they are highlighted) just to hear “I have no business there”.
Basically, it’s a very simple, light-hearted homage to Monkey Island that would need lots of improvement to be truly wholesome, especially for the asking price of $15 for the first 2-hour episode.

The writing is what did it for me. It needs COPIOUS amount of editing.

It was pretty “meh” to be honest. Did you try it?

The general components are there, but the writing is just not good, and there’s lots of very rough, raw “indie” moments to it. Like the game refusing to let you out of the location until you check everything the game wants you to check

No I did not, but i will soon.

I don’t mind those old school styles tho i always loved games that start with vast environment from the beginning like KQ4 or LSL3, but this kind of gameplaying where you are not allowed to leave a certain area before you discovered something or did whAts needed reminds more of the post-classical era. 2000-2010.

I like the look of this game, but there are always huge red flags for me when a new game appears that looks just like one of the classics (in this case Curse of Monkey Island). There is always a risk that developers - always with very good intentions - wanted so much to replicate the games they loved that they forgot to put in quality into the other areas - writing, gameplay, and originality. And these are essential, not just great looking visuals.

Yes, many jokes and even puzzles in this game are referring to the classic. I can overlook many things, but in this case - writing and humor was just not up to par. It’s definitely not a terrible game, it’s just a “blah” game. Since this is a first episode, there’s a potential for improvement, of course, but I was underwhelmed.

I’d love to hear your thoughts when you’ll get to try it, Advie!
And anyone else who played it : )

I was interested in giving this game a try, but the price seems high for what I’m hearing is under 2 hours of gameplay, especially when you need to pay the same price again for the second half. $30 for 4 hours of game, when Thimbleed Park is $20? Urg, that’s hard to justify even when I want to support an indie developer.

The thing that made me decide against it though is that the writing really needs an editor - I watched a let’s play of the first ten minutes on YouTube and I’m amazed the voice actors didn’t point out that some of the lines just simply don’t make sense. It’s a shame when so much attention has been given to other aspects of the game, like the backgrounds and animation.

I don’t hold the fact that it’s highly inspired by Monkey 3 as an issue though - if the creators loved that game and wanted to create more of it then that’s great. A pet irritation of mine though is indie games constantly including (not at all subtle) in-jokes to 90s adventure games - and something like the seventh line is Joyfess saying he was inspired to be an adventurer by “Brushman Thronehood” - arggh!

Boy, the main actor for Joyfess isn’t great, is he? It sounds like he’s reading from a page. All the other actors in the game outclass him by a wide margin.

And I wonder if the game is more self-aware than it appears. One of the first lines is: “Fighting a giant squid would feel like the most awesome thing in the world when you do it the first time. But when you keep fighting giant squids through five years on a daily basis, it just becomes boring.” Which could apply to the whole adventure game scene after around MI3.

Hey all,
This is Haritha, the developer of Joyfess. It was very nice to discover your discussion about our game. Thank you for sharing your feedback and impressions. There are indeed shortcomings which we intend to avoid in Ep2. But before I address them, please allow me to dwell a bit on the game’s development history—how it was born and came to life. Joyfess, when it first started, was not intended to be a commercial product; it rather started as an attempt by a high school student (my brother, Kinan) to win a school Flash programming competition (and BTW, he won second place). Can you imagine how that Flash game looked like? Well, have a look at the attached images. That colored scene is how the game looked liked! 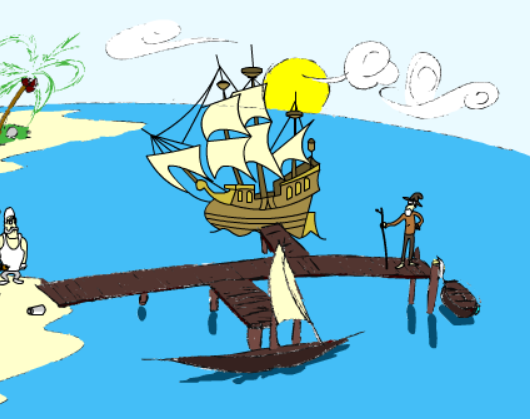 I won’t go into the details here (which can be found online as a response to a written interview). What happened is that we kept raising the bar bit by bit, and before we knew it, we found ourselves developing something at commercial standards. The way this game evolved from something that was made at home garage for fun into something commercial probably sheds light on a few of the issues you mentioned. This game is an upgrade for a preexisting design. Put plainly, the game did not get the chance to have a “clean start” to begin with. The good side of this is that in our next project, we will have that clean start (and with many lessons learnt) to give us a boost.

- This is not the first time we hear someone describe our game as an attempt to clone MK3. Well, it’s not, yet I don’t know if we can blame people for having that impression. Clearly, MK3 was one of our biggest inspirations when it comes to visual design (obviously). The story itself, however, was independent of MK3 right from the start.

- Since leaving the restaurant upon starting the game without collecting certain clues would leave the player aimless, we’ve made their acquisition mandatory for leaving the scene. We totally understand the effect of such hurdles on the smoothness of the game’s flow and have as such already removed prerequisites from some of the puzzles. These prerequisites are now just hints, but you can totally bypass them by finding the solution on your own. We’re very interested in this type of gameplay-related feedback for Ep2 and will totally avoid anything resemblant of the “bar scene prerequisites” issue.

- Re Price: This was fairly tough for us because we needed to set a price that justifies the costs and value of the animation and voice acting. Yet, our underestimation of the limited value of the game’s playtime undermined this initial pricing. Therefore, we actually do agree with you and intend to revise our price soon. We’re thinking of a way to be fair with our early purchasers while also making the entire package of both episodes available for a fair and affordable price for future purchasers.

Again my team and I were so glad to discover this thread and have a look at the constructive criticism. Since as I explained above, our current game evolved from a fetus that set the foundation and path early on (often against what we would have chosen in the case of a fresh start), we’re quite hopeful that we will be at a more superior position to design a significantly better product, with a “clean start” this time.

P.S. The next time we’ll hire a native speaker to edit the script!