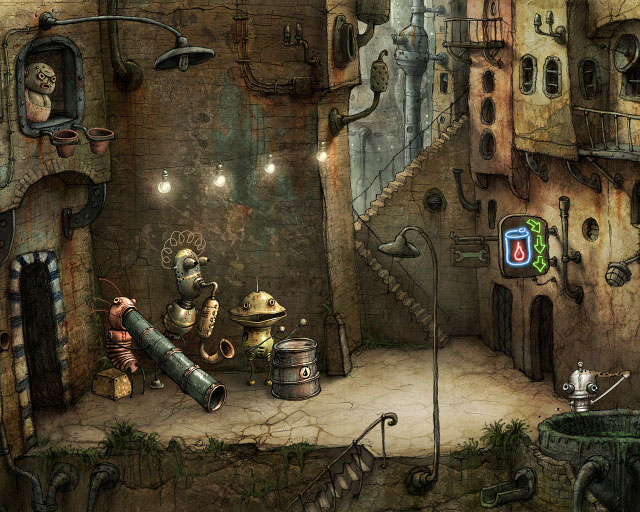 I immediately noticed the best adventure band ever wasn’t in Chrissie’s quiz.

That was such a terrific scene!  I remember watching it several times through with a silly grin on my face.

There’s never enough time to do all the nothing you want. -Bill Watterson

Still stuck in Machinarium myself, just as you enter the outside world and can push a big box forth and back with the lady present and the dog on the other side, etc. I have no idea how to solve this area, but I’ll get back to it… someday.

all the scenes from this game deserve to be printed out and put into exposition.

I now I will get panned by this but I just don’t see why people place this and other games like it (including Neverhood)as an adventure. More like a Casual/platform hybrid to me.

Fien, you reading this?

I now I will get panned by this but I just don’t see why people place this and other games like it (including Neverhood)as an adventure. More like a Casual/platform hybrid to me.

Definitely not a platformer (THIS is what I think of platform games), and even though I agree with you it’s slightly on a casual side, it’s still not an easy game, and still an adventure because you’re solving puzzles to advance the story. I think it’s a good game (not outstanding, but pretty good), but the reason why I agree with you when you say “casual” is because of 2 things: First, you can move your character only to predefined spots, and secondly, puzzles in most cases are current screen-related. I’m not saying the game is bad because of it, but if someone asked me what could be improved in Machinarium 2 I’d mention those points.

I didn’t mean to imply the games were bad, just don’t see adventure game when I tried them.

I immediately noticed the best adventure band ever wasn’t in Chrissie’s quiz.

I have a disc version of Machinarium on my to play pile, but before I saw your post Fien I thought - hey! that would have been a good screenshot for my quiz (oh well -  boohoo!)

Been there, done that, got the T-shirt. (Literally! Asked for and got it last Christmas.


I see where you’re coming from… I always considered Angry Birds more of a casual/flight simulator hybrid.

Machinarium is as point and click adventure as they come. If the game was Limbo, then we could talk about platforming.

let’s take this scene for example.

we have a classic puzzle here. three musicians with three damaged instruments for all of which you need to solve another puzzle (which is not on this screen). and for reward you get the piece for your next puzzle. sounds exactly like adventure to me. it may differ from the classic definition in some ways: has no speech, has mini games in it, you interact only within the area around your character. but platformer? come on.

If someone calls Machinarium a platformer, he might call ALL 2d point’n click adventures (MI series, SQ series, Larry series, FT, KQ series, TWW, E&H, etc and generally half the games in adventure game history) that way as well!!

There is not a single piece of action element into the game!!! It is based entirely on riddle solving!!! How more proof is needed to be called a PURE adventure game?

Fien, you reading this?

Greyfuss is totally out of his depth, that’s all I can say. Read the definition of platforming.

A platform game (or platformer) is a video game which requires players to jump to and from suspended platforms or over obstacles (jumping puzzles). The player must control these jumps to avoid falling from platforms or missing necessary jumps. The most common unifying element to games in this video game genre is a jump button; other jump mechanics include swinging from extendable arms

Pray tell me, GF and Timovieman, where is the platforming taking place in Machinarium?

I see where you’re coming from… I always considered Angry Birds more of a casual/flight simulator hybrid.