Alright, this is it: the final day of the Scenies. Hopefully this was a nice way to honour 2012, and it may have given some of you ideas for great games to try out or replay.

But now it’s time for the final award: the Scene of the Year. I could make a huge speech here in an effort to increase the tension, but I doubt the winner will come as a surprise to anyone, so let’s just get on with it.

(and yet more drumroll!)

(It’s the last day, we might as well get all we can out of those drummers.)

(They weren’t cheap, you know!) 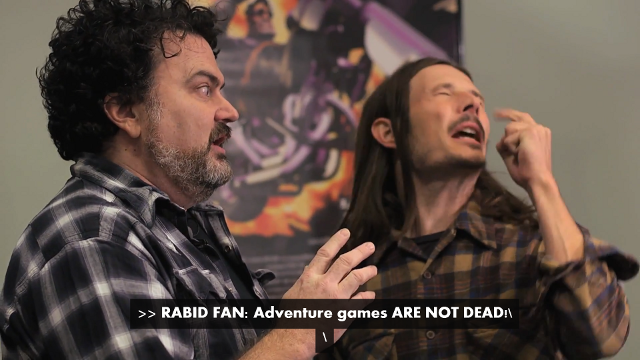 For a second, it might seem odd to have chosen a scene from promotional material for a game that hasn’t even been released yet. But really, 2012 has been the year of the Kickstarter. Ever since Tim Schafer launched his fundraiser and raised a million dollars in 24 hours, things have changed.

Since then, many adventure projects that probably would never have happened without crowdfunding were launched, including a Leisure Suit Larry remake, two new games from Jane Jensen, a new game from the Two Guys from Andromeda, the sixth Tex Murphy game, Broken Sword 5 and a new adventure/RPG hybrid from the Coles. 2013 started looking extremely promising, all of a sudden.

Of course, all these projects will probably run into delays and budget problems—as is currently the case for the Double Fine game. And there’s no guarantee that the final results will all be brilliant. But hopefully, we’ll get a few good, or possibly great, games out it all. And, even more importantly, it may show that crowdfunding is a viable strategy, that fans of a niche genre are no longer bound by “current market place realities”.

And so, what better way to conclude 2012 and to look forward to the new year than with Tim Schafer’s words from the day his Kickstarter concluded:

If you’ve ever been told that you’re part of a niche market, if you’ve ever, like… when you were a kid you had your favourite TV show cancelled, or you hear about your favourite band being dropped by their label for not selling enough, and you’ve just been, like, “why does a big company get to choose what music I listen to or what movies I watch, or what TV shows I watch, or what game I get to play…?” Now you know they just—they can’t do that anymore. You can choose.

I’ll raise a glass to that.

Few videos have provided me with such an extent of warm fuzzies as this one. Absolutely loved it, and I will probably remember it till the day I die

And, even more importantly, it may show that crowdfunding is a viable strategy, that fans of a niche genre are no longer bound by “current market place realities”.

I remember a petition to bring back Sam and Max, signed by over 50,000 people. Wasn’t the petition started by a regular AG poster? Just imagine what might have happened if we’d had Kickstarter in 2004… Not that I have anything against Telltale. Everybody was happy when they made Season 1.

The whole Kickstarter craze has been wonderful, and especially Double Fines handling of the whole thing has been fantastic. Happy new year everybody - may 2013 bring forth a ton of great adventure games

More like BIGGEST NEWS STORY of the year. This was our year baby! 2013 even looks better.