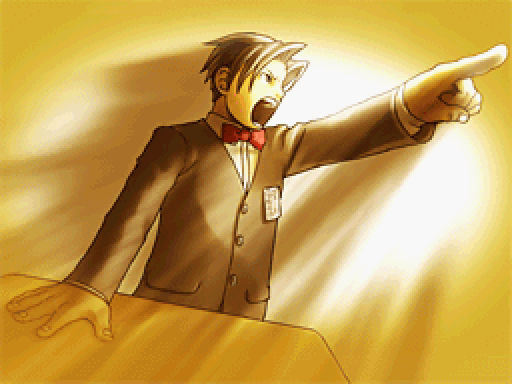 Happy new year everyone! Here’s a mini Edgeworth (from the first Phoenix Wright game) to kick off 2013 in style!

Also, Phoenix Wright: Ace Attorney is one of the best games ever, imo. And it’s very funny to boot. 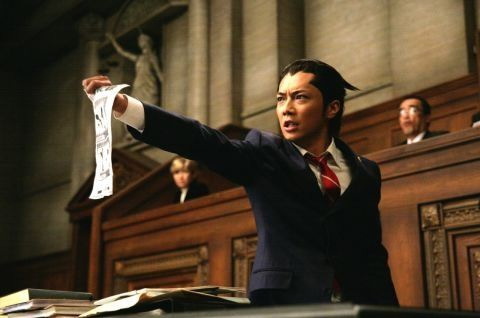 I *really* hope Miike’s film gets an international release.
Or even a Japanese release with English subs, so I can import it…

Just finished replaying the first game, and it was once again awesome!

‘Phoenix Wright: Ace Attorney’ is a really fun game. You play as the titular Phoenix Wright, a rookie attorney with a bit of a doofus persona who’s always caught up in bizarre cases, defending clients that have all the evidence stacked against them. But things are never quite like they seem, and by carefully exposing contradictions in the evidence and witness’s statements, you start turning the cases around one step at a time.
The main thing that needs to be said for this, is that the writing is great. Every single case has layers upon layers of twists, turning the entire thing upside-down multiple times before you reach the truth. And not only are the cases full of mystery and surprising twists, this entire game is also incredibly funny!
You’ll be hit with amusing descriptions, running gags, slapstick, a wide variety of unique (and often hilarious) characters, and above all: superbly entertaining visual (over)reactions by the characters (the part where the game’s Japanese origins are the most visible). When you’ve found enough contradictions in a person’s testimony to be able to confront them with the truth yourself, most characters go into a “freak-out” mode that will often leave you in stitches. Add to that the fact that most characters are ridiculously comical from the get-go (like Phoenix’s idiot friend Larry Butz, bumbling detective Dick Gumshoe, the totally clueless judge, your ‘assistant’ and spirit medium-in-training Maya Fey, and angry security lady Wendy Oldbag), and you basically have a great recipe for humour.
And then I haven’t even mentioned the best character this game has to offer, gifted prosecutor Miles Edgeworth who’s your opponent in three of the five cases (and coincidentally the one you’re defending in a fourth). Miles Edgeworth has the most interesting character arc in the entire series, and Capcom also realized his potential, as he not only is a recurring character in the other Phoenix Wright games, but he got his very own spin-off ‘Ace Attorney Investigations’ series…
I could go on and on about how great the writing and the characters are, but you really need to experience this gem for yourself. Just be aware that the game is essentially a visual novel with minimal gameplay (you’ll be reading more than you’ll be playing), but the story and the writing is top-notch, and you’ll probably be spending close to 30 hours on a playthrough, so you’ll be getting a lot of bang for your buck.
And if you wonder why the fifth and last case in the game uses more of the Nintendo DS functionality, that’s because the first four cases are basically ported from the GameBoy Advance, with a fifth added solely for the DS. The fifth case not only brings a few more gameplay options with it, but it also accounts (in my case) for about 12 hours of Phoenix Wright fun, making it by far the longest case in the game.
‘Phoenix Wright: Ace Attorney’ completely took me by storm, and I’ve been a big fan of the series ever since. If you have a Nintendo DS, then this is one game you don’t want to miss…

I *really* hope Miike’s film gets an international release.
Or even a Japanese release with English subs, so I can import it…

Just finished replaying the first game, and it was once again awesome

The first Phoenix Wright is still my favorite one, I also need replay it someday.

Saw the Phoenix Wright movie. It’s the most faithful movie adaptation of a game yet so it’s awesome. Totally worth it checking it out somewhere if you’re a Phoenix Wright fan, and maybe even if you’re not familiar with the series.