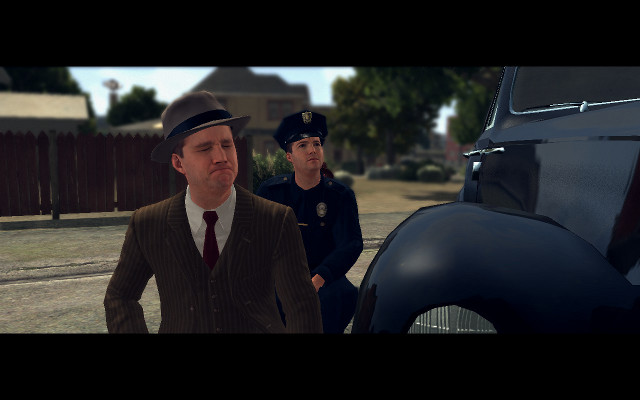 The point of doing repeats this week was to avoid spending time getting screenshots and writing posts, but I’m going to make an exception today for LA Noire. I hadn’t played the game when I posted a scene from it earlier this year, but since then I have—and what a disappointment. What a boring, formulaic game. It feels like every one of its 274 mini-cases follows the same formula:

1) Go to some location, walk in circles paying attention to the “oh here’s a clue” sound effect.
2) Figure out the whole case in five minutes but know that you’re going to have to go through the motions for two hours until stupid Cole catches up.
3) Interrogate some character. Never fail to be surprised when the way the conversation proceeds seems to bear no relation to the reply choice you picked.
4) Go to some other location. Walk. Circles. Clue sound.
5) “Playtests show that, at this point, players are getting bored out of their wits. Since we don’t have a single writer on hand who’d know how to make the case more interesting, let’s just throw in some random, tedious chase sequence! That should get them excited!” (Sorry, doesn’t work.)
6) More random interrogation!
7) “By the way, did you notice that this actor too was in Mad Men? Marketing thought that if we had enough such cameos we’d manage to leech some of that show’s prestige.” (Sorry, doesn’t work either.)
8) Lather, rinse, repeat…

Ugh. I finally gave up in disgust 17 hours into the game, halfway through the second (?) case of the vice desk. The whole homicide desk was particularly awful. It’s obvious that the cases are related, but the game forces you to slog through each of them as if they were independent, pretending to be interested in the specifics of the victim’s life, even though you should clearly be looking for a serial killer (whose identity, by the way, is extremely obvious).

I know the game has its fans, so I guess it has some qualities I’m not seeing. But frankly, at this point I don’t care. I just want those 17 hours of my life back.

I thought the game was interesting at first, I really liked the new facial animation technology, it was the first time in a 3D adventure that I didn’t think the characters looked like puppets on strings. But I can’t disagree about the boring and formulaic part, the repetitiveness of the game drove me mad, and it’s currently on hold.

Completely disagree with you on all counts.

1) Go to some location, walk in circles paying attention to the “oh here’s a clue” sound effect.

1) Enter Location, scan screen for hotspots paying attention to the change in cursor.

(Oh and you can turn the clue noise off)

Sorry you didn’t enjoy it. Not every game is for everyone.

But there’s about 80 minicases of street crime too, right?

Plus about a million different cars to “collect”, landmarks to spot, film reels to find, etc.

I agree with earlier stated sentiments that the Homicide Desk is far too long (since it’s obvious early on that the cases are connected - you’d have to be really thick to miss that). Rusty has some pretty cool quotes, though (despite me liking Bukowski and Biggs best as partners).
But there’s just too many, too similar cases to plough through before the story starts shifting gears. It’s only near the end of the Vice Desk that things start picking up, which is 80% into the game. That’s too late. I can understand people giving up before that point (because it’s definitely a lengthy game).

The game looks absolutely stunning, though. Plus the amount of actors that I could recognize from movies/TV (or that I start recognizing now from L.A. Noire) is mindblowing.

Anyway, I already wrote some pretty long posts in the archives about this game.
See here and also here.

But there’s about 80 minicases of street crime too, right?

Plus about a million different cars to “collect”, landmarks to spot, film reels to find, etc.

None of which are essential to completion of the game and can be easily ignored.

I also played the game like a 3D adventure game, turned off the hint noises and never drove anywhere (Just get your partner to do all the driving)

It’s not a perfect game by any means, but it was revolutionaly facial tech and a fun game (IMO)

Just watching Phelps on Hawkshaw uniform is worth a few hours of gameplay.

I got a bit bored after 30 hours but will still get back to this.

Currently playing: The Legend of Heroes: Trails in the Sky
Recently finished: Amnesia: Memories, Amplitude: A Visual Novel, Whispers of a Machine, The Painscreek Killings, Eastshade
My game reviews and other stuff: Lux Atarnia

I for one love-love-LOVE this game, but then again, I have a huuuuuge thing for film noir and the style sense of the 30s and 40s. A sequel to this one is very high on my wishlist.

The unfortunate incongruity about L.A. Noire is that it’s visually stunning (I played the game entirely in black and white as it just feels wrong in colour) and the writing is engaging but the actual game aspects are hollow and weak. I thought it was a bad decision that so many of the interrogations relied on intuition or reading the suspect’s face and body language rather than having solid evidence to go on like you would in an Ace Attorney game. It’s very trial and error the whole way through the game’s long ass playtime.

I also remember one mission where you’re driving through L.A. and you have to figure out which L.A. landmarks to drive to by deciphering cryptic clues. Now, I don’t know the first thing about Los Angeles landmarks other than you have the HOLLYWOOD sign and the cement place where you put your hand and footprints so I cruise around for a while to various areas that I think would match the clue until my partner would eventually say something like “Hey, do you think the clue refers to Griffith Park?”

Did this game really expect me to drive around to every nook and cranny on the map and become well accustomed to these various landmarks before I took on this mission? If so, then why did the game make the driving elements so boring? I can’t hit pedestrians or outrun cops like in a GTA, I can’t go into any of the buildings and find secrets… This poor game - it was never on the level of an adventure but it sacrificed what it meant to be a true sandbox game as well.

The soundtrack is great though.

It is a flawed game yes, but I still enjoyed it very much!

I also enjoyed the game very much.

What i partically loved was the interogation parts, finally a game where many of the puzzles where dialog based. IMO there isn’t enough games with dialog based puzzles.

Ok walking around looking for clues was a bit boring, and you know the cases are connected long before the protaganist does, but no game is perfect!

I personally liked the treasure hunt part. I have zero clue about L.A. but I cracked it fine. One of them I had to try a couple of times, rest of them I figured out pretty much instantly. The whole case was also a nice variety to otherwise very similar gameplay.

I also love noir setting in anywhere, even when it’s mixed with scifi and fantasy (and why wouldn’t I since I love scifi and fantasy too). And it’s nice that it’s a long game. Without the DLC I might be through it already.

Currently playing: The Legend of Heroes: Trails in the Sky
Recently finished: Amnesia: Memories, Amplitude: A Visual Novel, Whispers of a Machine, The Painscreek Killings, Eastshade
My game reviews and other stuff: Lux Atarnia