Something weird is going on with the squirrels!

It's a line you might expect to see in a trailer for some wacky platform game where you collect nuts and jump on the heads of evil vultures or something, not a review of a meditative first-person adventure game. But NUTS doesn't follow the standard set of rules. There were even times I wondered whether this is an “adventure game” at all, or some kind of nature study sim. But NUTS has a story to tell, and that story is as excellent and unexpected as … well, everything else about the game.

Made remotely by a handful of independent European developers, NUTS takes a bold stylistic approach. It presents its natural forest landscapes in clean 3D cel-shaded art, minimally detailed and displayed in a bright vaporwave palette. As you're dropped off by the side of the road on your first day of a new job, three vivid hues envelop you. You'll walk down a flat purplish-grey street, lined on either side by purplish-grey rocks and trees and the occasional bright red point of interest, highlighted by soft salmon-colored lines against a faded background of the same color. You're then drawn into the Day-Glo serenity of Melmoth Forest, which you're told will be your home for the season, by the sounds of the wind slightly shaking the leaves on the trees and the padding of grass beneath your feet. 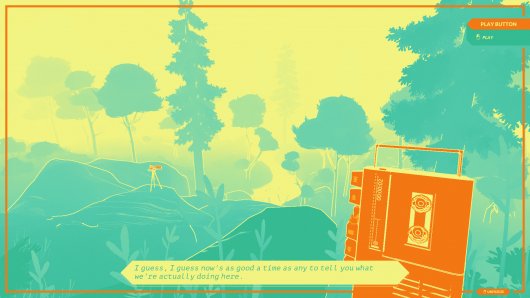 As you navigate a short trail to the mobile camper that will serve as your base of operations, transmitting over a walkie-talkie is the only voice you hear in the game: that of your boss and mentor, Professor Nina Shultz, who explains that your job will be to research the squirrels in the forest. Professor Shultz is voiced admirably by the game's audio designer Almut Schwacke, who brings a boatload of charm to the character. Schwacke is also the composer, so along with the chirping of distant birds and mumbling of a far-off creak is a soft ambient soundtrack, a mostly electronic score that bounces between soothing tones, discordant noise, and driving synthesizers, fitting each moment perfectly. When it wants you to feel unsettled, you're there. When it wants you to feel excited and intrigued, it happens. When it wants you to just relax and explore the area at your leisure, it’ll genuinely feel like a walk in the park. It's incredibly effective, and I think of Schwacke as a shadowy superstar behind the curtain, expertly pulling you into the world of NUTS.

Early on the tone is one of comfort, as you settle in and check out your new environment. The game introduces you to its basic mechanics through a series of simple challenges: locate the key to your camper, find a way to power it up, and send a fax to Professor Shultz to let her know you're there and ready to go. You wander around freely using typical WASD controls and a mouse, or the dual sticks of a controller, with dedicated keys or buttons to jump, crouch, and run. I found the controller provided a smoother and more intuitive gameplay experience, especially as your in-game devices are introduced and each gets bound to a different D-pad direction (assigned to numbers on your keyboard). Soon you acquire a diary and the camera you can use to take instant pictures at any time, and you’re given a small task to introduce you to their functions.

Once you complete what serves as the game's tutorial, most of the six main chapters follow a similar structure. You can wander around and roam the area as much as you want, and then notify Professor Shultz that you're ready to begin work. From there you’ll use the devices provided to track the movements of the forest’s squirrels. You fax your photographs, or printed screen grabs from videos, to the professor as you progress, and once you send her what she's ultimately looking for, you move on to the an entirely different map. Each chapter resets in a new area of Melmoth Forest with a new area to explore, new features to observe, and a new goal to complete. 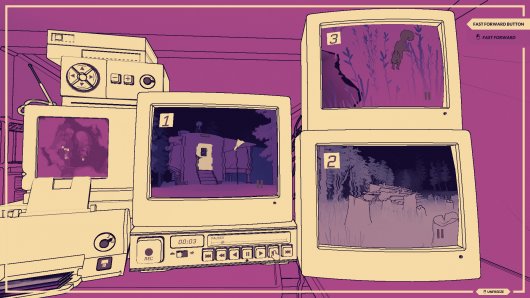 At the beginning of each area, you're given a series of tripod cameras. These link to closed-circuit TVs in your camper, which are equipped with a record button; the abilities to speed up, slow down, and reverse playback; a zoom function; and a print function. You're also given a GPS device that will indicate the location of each camera on the map, as well as the place where the professor last saw the squirrel you are tracking to use as a starting point. You also have a flag, which can serve as a marker if different sections of the forest look too similar for you, and a tape recorder for playing a few scattered audio logs you can find scattered around.

Each day you set your cameras up in spots where you think the squirrels may pass, then head back to your camper and hit record. The scene then automatically shifts to night and you can review the video footage from that day. Thankfully the game clips a minute or two of highlights for you to search through and hopefully (though not necessarily) find your squirrels. Once you scan the footage for whatever you were looking for that day, attempting to leave the cabin or using the bed will trigger the transition to the next day, at which point you'll be able to reset your cameras and start again.

In each location you're given different goals. It may be to find the squirrels' stash. It may be to track a particular squirrel's movements throughout the night from beginning to end. It's slightly varied in each chapter, giving you fresh new ways to use your tools and experiment with the mechanics. The squirrels repeat the exact same routines each night and there is no time limit on your tasks, so you can spend as long as you'd like finding the perfect place for shots and catching every angle of the situation before you hone in on exactly what you're looking for. I spent many days in Melmoth Forest with my cameras pointing in the wrong direction and my videos showing neither hide nor hair of my quarry, but thankfully you try as many times as you want and even in failure you're gaining more information. 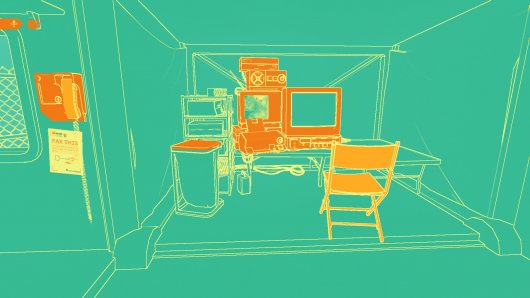 The game's palette also shifts with each new locale and day/night cycle, supplementing the current scene’s tone with complementary colors. The bright daylight of an open forest area may be teal, orange, and canary yellow; while a swampy area at night might be a dark purple, dull green, and washed-out mauve. The maps are small, taking less than two minutes at most even to circumnavigate the entire area, but each is loaded with unique points of interest to keep you intrigued and challenged. Expect to track your squirrels through discarded drainage pipes, abandoned treehouses, and dense clusters of conifers, to name just a few.

As soon as you wrap your brain around the basics of what seems like a cute little nature sim, the cracks start to form in the facade, hinting that there's something deeper happening under the surface. As you track the squirrels from chapter to chapter, you’ll notice that their behavior is strange and unpredictable. Likewise, Professor Shultz becomes increasingly concerned about the situation both in Melmoth and back home as mysteries surrounding your employers begin to form. As you continue to carry out your research in the forest, the professor will tell you about her own investigation and of course the two begin to converge. The game is fairly short, but over the four hours it took me to complete it, I found myself surprised and excited to unravel these emerging questions. The game then culminates in an entirely unexpected final chapter that delivers a bizarre and impactful ending. 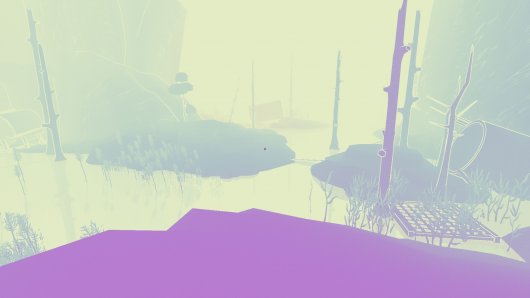 Despite being pretty gobsmacked by the finale, I still left the game with the feeling of wanting more. There were so many fun ideas to play with, and the game's mechanics were truly a joy to explore. In each of the six chapters, NUTS took the concepts introduced and pushed them around in ways that made each one feel unique and fresh, but never did quite enough with them to leave me totally satisfied. And when the story really started to come together in the final two chapters, it happened so quickly that I wished I had more time to stew in the intrigue and confusion. What I think I'm saying is that while I loved every minute of the game, I wish there was more depth to the full experience. I enjoyed spending time in that vaporwave sea of colors and ambient music, and I wanted even more meaningful reasons to lurk there, exploring and diving deeper into the mechanics. For a game with so much confidence in its ideas and presentation, it seems to move on from its new concepts as quickly as it introduces them.

I also encountered some bugs, mostly toward the end. There were issues with loading saves, in which the game would seem to think I was at both the beginning of the chapter and the spot where I left off – for instance, the journal displaying both the current objective when I quit and the first objective of the chapter now showing as incomplete. Fortunately, while my equipment would be boxed up again and the introductory prompts and chapter narration would play, I retained all the pictures I’d taken previously and was still able to proceed as if from the point where the game auto-saved. More noticeably, there were times when items would get lodged in open space and float in mid-air. These bugs were weird, but didn't really affect gameplay or impact my enjoyment that much.

Overall, NUTS is a fantastic experience, full of surprises and a truly bold tone that carried me from beginning to end. I went in expecting a game about silly squirrels and their antics and what I ended up with was something much more remarkable. The art, the sound design, the music, the story – all of it holds together as a beautiful experiment that I only wish I got to play around in longer and delve into more deeply. My hope is that we will see a sequel that expands on these ideas, or that the developers bring us something equally brilliant soon. Until then, the bright colors and soothing tones of Melmoth Forest and its mysterious squirrels will remain stashed in my head for a long time.

NUTS is available at:

Every moment of NUTS is surprising and delightful; its first-time developers have created a world you’ll want to spend even longer in to explore more deeply, full of fantastic design choices and an intriguing story that gets better and better as it goes along.

GAME INFO NUTS is an adventure game by Joon and Pol and Muutsch and Char and Torfi released in 2021 for Apple TV, iPad, iPhone, Mac, PC and Switch. It has a Illustrated realism, Stylized art style, presented in Realtime 3D and is played in a First-Person perspective. 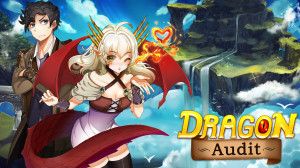 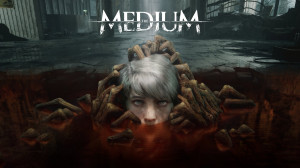 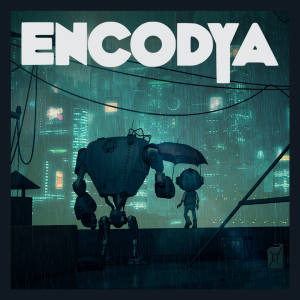