Adventure games by Geograpy of Robots

Sitting down to play a game set in Louisiana usually comes with preconceptions of what you’re going to run into. Voodoo culture, black magic, and folklore to name a few. NORCO sidesteps the majority of these expectations by focusing on modern or sci-fi aspects of Louisiana and, more broadly, the USA. In this debut release, the developers at Geography of Robots paint a southern gothic picture of human resilience in the face of corporate greed by putting you in the shoes of Kay as she navigates swamps, robots, and cults in this genre-bending point-and-click adventure. Some players may be put off by the game’s sometimes abstract sequences, and the large quantity of writing to digest but, as one of those players myself, I can say that NORCO smashes through those apprehensions and delivers a deep and satisfying experience.

The game begins with an introduction covering the nomadic endeavours of the main character, Kay, who has left home to travel throughout the US alone. As you are told about certain events taking place on her travels, it is also revealed that she left her brother and terminally ill mother behind. The introduction ends and the true game begins as you assume the role of Kay, who arrives back home after the news of her mother’s death. While exploring the house you had previously left, you begin to realise that your mother may have been involved in something dangerous prior to her death, and the bender you thought that your brother was on has turned into a genuine missing person case. The following adventure takes place around Kay’s home in Louisiana as she tries to piece together the puzzle of her mother’s escapades and her brother’s disappearance. The narrative takes many turns and segues, sometimes focusing on brief stories that provide context for the local culture rather than bolstering the overarching story.

The places you visit are not very extravagant, to say the least: gas stations, refineries, and a strip mall, but each location is still interesting thanks to the detailed art and the spot-on writing. You meet many NPCs along the way; each is characterised very effectively by their colourful dialogue, unique character portrait, or their Animal Crossing-style sound-based speech (less cute, more creepy, or abrasive at times).  Some characters come and go from the party, such as a toy monkey who may or may not be sentient, and Million, a retired security android. The game is as much sci-fi as it is anything else. By contrasting the comparatively grounded depiction of Louisiana with sci-fi imagery and ideas, it serves to make the technological aspects feel more alien. Characters sometimes speak in the local dialect, which is a nice touch, and contributed to my immersion, even if I had to google some terms as I went. 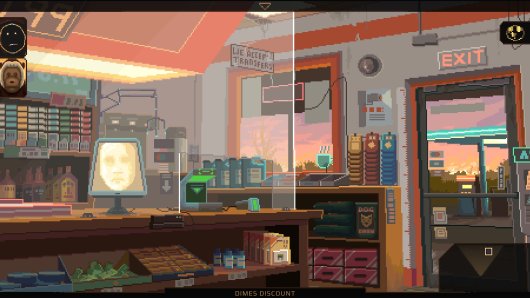 There are optional reading materials that can be found when searching rooms. These provide plenty of background info on this particular iteration of Louisiana, such as myths and legends, and recent events like natural disasters. Some material even criticises the industrialisation of the local area and how companies can take advantage of or even contribute to the decay of the land. NORCO’s setting exists as a microcosm of America’s future by predicting a bleak trajectory for corporations and fanaticism. These themes are but a few examples of NORCO’s rich tapestry. It’s not all doom and gloom though; the game’s narrative is laced with traces of silliness throughout, resulting in a satirical take on American culture. The silliness did begin to detract from the poignant atmosphere and commentary of the story at times, as the writing seemed to struggle to balance its abstract mystery with its satire. Overall though, the dialogue and narration both maintained a sense of irreverent poeticism which remained high in quality throughout the game. A fine example would be the game’s choice to describe an unpleasant photograph rather than show it, a decision that evoked a stronger sense of repulsion than an image could have.

Interacting with NORCO is sleek and simple. All that is required is a mouse and everything is operated with the left-click. The gameplay is from the player character’s point of view as you navigate between static screens using a mini-map system in the bottom right corner of the screen. These locales can be interacted with by clicking on hotspots. Icons representing your options pop up over hotspots when the mouse cursor gets close enough to them. Interaction is quite typical of a point-and-click game; you can talk to NPCs, examine objects, and pick them up. Acquired items are added to your inventory, which is represented by a knapsack icon on the right-hand side of the screen. Your inventory always remains fairly small throughout the game, avoiding the sometimes unmanageable clutter of other point-and-click games.

Occasionally, Kay and her party are forced to engage in combat. This places you into a turn-based system where you pick which character you wish to fight as, and then partake in a mini-game - either timing or memory-based - depending on the party member you have selected. These sections are not too difficult and are rare, but may still annoy anyone looking for a fully laid-back experience. While the game is mostly focused on atmosphere and narrative, there are a few puzzles dotted throughout. One section has you navigating a swamp (the user interface [UI] works differently here, requiring you to drive a boat from a bird’s-eye view), and another has you recording NPC dialogue onto your in-game phone to use against them. You’re not likely to have any trouble with these, but the beauty of them is how they manage to stay so solidly grounded within the world that is presented to you and how it so seldom becomes a case of using the right object on the right hotspot. 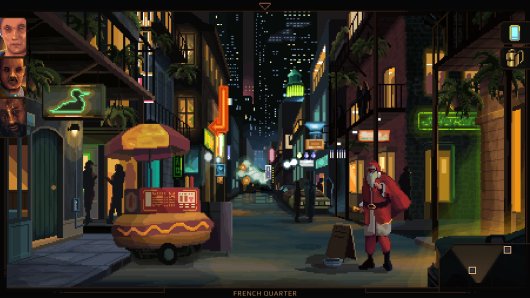 The main details of the story and its characters are logged in Kay’s “Mindmap”. An interface you can access at any time, it shows an array of connected bubbles, each representing a character or important object. These bubbles are unlocked or updated as the story progresses, allowing you to return to the Mindmap whenever you need a refresher on certain details. The Mindmap also serves as a tool for showing you how Kay feels about these characters and events, as she is generally a voiceless, and faceless (quite literally, her face is one of very few that is represented by a simple circle with dots for eyes and a line for a mouth) character. She seems emotionless at first, an assumption that is broken down as you experience the game. NORCO contains multiple endings. They are not so wildly different from one another; however I do believe that, to get the one that I got, you must finish one or two extra tasks as you play through the game.

NORCO employs a highly detailed pixel art style and does it very well. The high pixel count allows for absolutely beautiful renditions of locales, vistas, industrial areas, body horror, and symbolic imagery. Artistic skill is evident in the consistent use of colour by utilising mellow tones of orange for sunsets, and blues and blacks for the game’s nightlife spots and moonlit swamps. Much like the writing and dialogue, the art also manages to inspire awe, fascination, and discomfort exactly when the story requires it. Unfortunately, there were certain screens that showed a disappointing lack of polish which detracted from the experience somewhat, especially when contrasted with the game's overall high artistic standards.

Although the game consists of static screens and locales, they are brought to life with the addition of subtle animations; lips move when people are talking, traffic glides along in the distance, rain falls…. The sound that accompanies these details is also top-notch. The pairing of the visuals and sound design is so perfect that I have never felt so immersed in a 2D adventure game as I have in NORCO. As you navigate the UI, stylized clicks and whirs accompany every mouse click, making the simplest interactions feel satisfying. 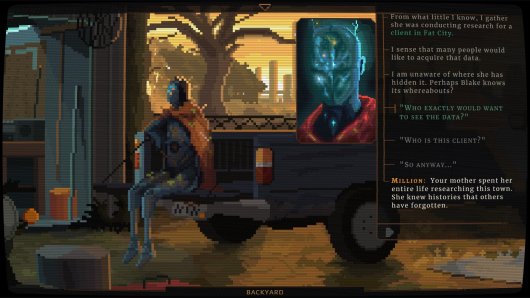 The music is extremely diverse, zipping between genres with ease. I would almost be inclined to criticise its lack of focus if it hadn’t accomplished everything so handily. The game begins with ominous throat singing, perfectly setting an uneasy tone which will accompany you throughout the whole game. 16-bit-style synth pads will provide you with a sense that this place really feels like home to Kay. Short stings occur when something creepy or surprising happens using slightly detuned instruments to hit it home. You will come to know these motifs quite intimately, which really solidifies NORCO’s lasting impact as a whole.

NORCO, quite frankly, is a genre-bending, narrative masterpiece. The story and its themes are so rich that I was left thinking about it for weeks after finishing it. With almost perfect visuals and sound design, it will immerse you more than any other 2D adventure game I can think of. Even with its low density of puzzles, and the slight lack of consistency with background illustration, everything else seems so competent that you just assume that the inadequate parts are serving a purpose that you don’t understand. In the end, NORCO manages to be funny, surprising, creepy, intense and touching, right when each moment calls for it. It is essential for adventure fans who can appreciate a lot of dialogue and narration, and while ardent adventure gamers might wish for more puzzles, the challenges that are there are terrifically varied and clever.

NORCO is available at:

NORCO is a one-of-a-kind adventure, expertly written with (almost) perfect artistic direction. The lack of frequent puzzles is made up for by their unusual quality and variety. A must-play for narrative adventure fans.

GAME INFO NORCO is an adventure game by Geograpy of Robots released in 2022 for Mac and PC. It has a Stylized art style, presented in 2D or 2.5D and is played in a First-Person perspective. 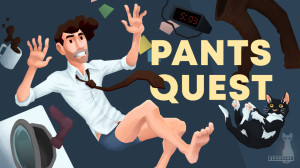 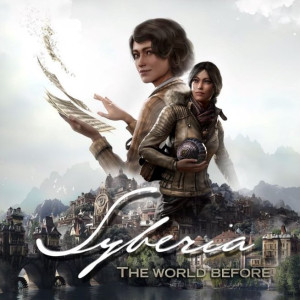 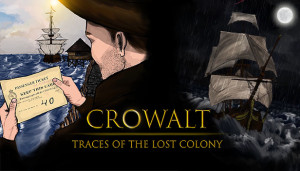 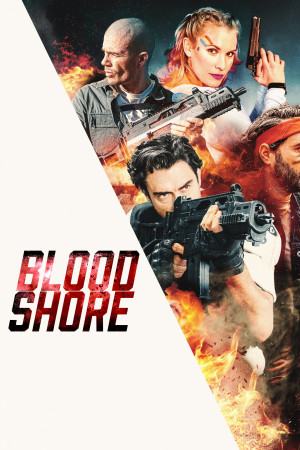