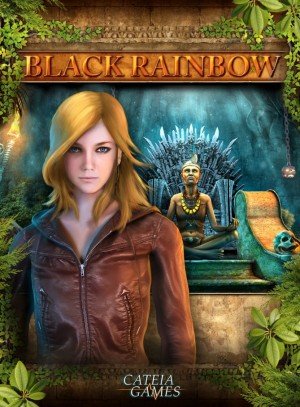 It’s one thing for an optional tutorial kicking off the game to give step by step instructions on where to click and what to do to solve the first few puzzles, but Black Rainbow remains determined to hold the player’s hand throughout – more so than one should expect, even from a “casual” point-and-click adventure. Though staying faithfully focused on a traditional inventory-style approach, the game lacks any attempt at challenging its players, offering way too much assistance and not enough appeal in either its gameplay or story to warrant spending any time with it.

Summing up the clumsy narrative is a simple yet delicate task, as adding any interpretation runs the risk of making it much deeper and more cerebral than it really is. Players assume the role of Helen Stone, who escapes an attack by a tribe of natives in the jungle where she resides, and finds herself somehow tasked with stopping an otherworldly evil that is attempting to cross over into our world. In order to stop this from happening, she must collect a certain mythical artifact and use it to seal the gateway.

The story, such as it is, is about as unrefined and cookie-cutter as it gets, told in broad brush strokes without any aspects particularly fleshed out. Characters you’ll encounter enter and leave seemingly at random, and are as forgettable as the rest of the adventure. Most pop into the story, deliver two or three lines of inconsequential dialog, and disappear again, never to return. Helen herself doesn’t fare much better; by game’s end, I had absolutely no sense of who she was, or why she was picked to be the savior that the future of the world depended on. Perhaps it was a bit much to look for character development in this title, but even a casual adventure like Black Rainbow should set its sights higher than this. 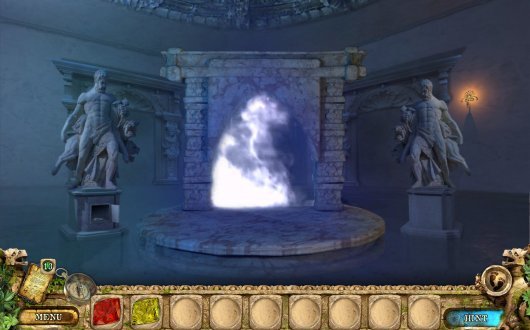 Honestly though, given the quality of the game’s writing, stagnant characters were to be expected. Generic terms like “Chosen One” and “Evil Lords of the Dark Ether” are freely bandied about; at one point Helen refers to a tribesman about to be ritualistically sacrificed as a “poor guy”. Possible localization issues aside, Black Rainbow is penned wholly without finesse or subtlety.

More palatable, though by no means outstanding, are the hand-drawn graphics. There are a wide variety of often fantastical environments to explore, but with locations ranging from “jungle scene” to “snowy mountain scene” to “cave scene”, the game is often filled with limited color palettes. Little effort was put into making the artwork eye-catching, and the listless wash of colors looks like a thin smear of Vaseline has been applied to the camera lens. The occasional animation enlivens some areas, but the design as a whole fails to elicit any spark of wonder. I would have loved to explore further, for example, when I ran into a regal merman after delving underwater with a water-breathing potion I’d just procured, but was disappointed to find that there was no further way to interact with anything. What should have been a memorable moment of wonderment received instead only a wincing shudder due to the utterly bland environment and what amounted to a grotesque caricature of a mythical creature sitting amidst it all.

In each area, players click to interact with the environment, activate objects, and speak with characters. Collecting items to use from the inventory is the chief gameplay mechanic, and finding the right items for the job is usually not difficult, as they are generally plainly visible in the uncluttered environments. In fact, a number of times I got the feeling the designers simply gave up, putting the items necessary to complete a task right next to where they were needed. Need to repair that wooden bridge? No problem, there are some boards available right next to it. The few times I wasn’t using inventory to proceed, I was solving a Pull-the-Lever or Remember-the-Sequence puzzle instead. As the map expanded later in the game, it became a little more common to backtrack a bit to finally unlock a door or chest using a key I had just acquired. While backtracking is generally not a good thing, in Black Rainbow it was almost welcome, as it broke the monotony of “pick up item, use it ten inches away”. 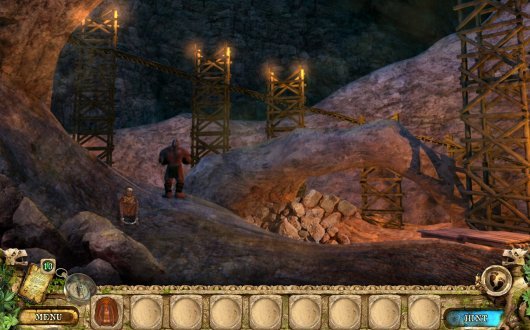 To further uncomplicate things, the game provides a ridiculous amount of help along the way. From the outset, three difficulties are available to choose from, the differences relating to how quickly the hint/skip gauge refills and whether sparkles are added to interactive areas. Even without the sparkles, though, identifying hotspots in each scene is a cinch – the cursor automatically changes when an object can be picked up or an area zoomed in for a close-up view. Regardless of which setting you choose, an optional in-game map can be consulted at will to immediately see which location you should be traveling to in order to complete the task at hand; it even lets you instantly fast-travel directly to these locations. Several times, when an obstacle requires multiple items to be used on it to activate, the game displays an on-screen shaded silhouette of the required objects, making it easy to simply match the shape with what is in your inventory at the moment and – voila! Even playing on the highest difficulty, I completed the game in just over two hours, though that time could likely have been cut significantly as I did not yet realize I had the option of fast-traveling.

The game’s sound is fitting at first blush: tribal drumbeats, exotic flutes, mysterious or thrilling background music and appropriate jungle ambiance. But all that changes when the voice acting begins. Without exception, the actors cast in the speaking parts – though thankfully few and far between – seem to adhere to arbitrary rules about low-pitched, threatening voices and slow, deliberate cadences. This makes the entire dialog sound like a casting tape for a B-movie production.

Even from the most relaxed of casual standards, Black Rainbow represents no achievement in adventure gaming. It features a forgettable story seemingly made up of stock taglines from schlocky 1950s science fiction movies, an uninteresting cast of plastic characters, and an insultingly easy difficulty at times. What it does offer is a couple hours of straightforward inventory puzzles, and a presentation that won’t burn your retinas or burden your ears. While there’s not much reason to recommend it, the game is inherently playable while it lasts and may appeal as a mild diversion to those not concerned with content so much as a chance to run on autopilot for a spell.

With a threadbare story and very low challenge threshold, Black Rainbow is a game that won’t appeal to any but the most novice of casual gamers.

GAME INFO Black Rainbow is an adventure game by Cateia Games released in 2014 for Android, iPad, iPhone/iPod Touch, Mac and PC. It has a Illustrated realism style, presented in Slideshow and is played in a First-Person perspective. You can download Black Rainbow from: We get a small commission from any game you buy through these links.
The Good:
The Bad:
The Good:
The Bad:

What our readers think of Black Rainbow