Usually adventure games start out on PC and eventually get ported to mobile devices, but sometimes the process is reversed. Case in point: the debut installment of Pine Studio's Faraway series, which is available now for PC in an updated "Director's Cut" version.

While story details are sparse, players step into the first-person shoes of "an adventurer exploring ruins of ancient temples full of challenges and mysterious riddles." Following in the footsteps of your father, who disappeared mysteriously a decade ago, you find yourself in a desert realm once "ruled by an ancient civilization" but long since deserted. What remains, however, is a series of complex tests in the form of "constructed devices and puzzles to see if you're worthy of knowing their secrets." To succeed you will need to delve deep into twenty unique temples as you attempt to "collect items, manipulate devices" and overcome the gauntlet of challenges before you. Along the way, you may also find pages from your missing father's diary, which will help you finally "find out what happened to your family."

Described as "a modern tribute to Myst," Faraway is a free-roaming 3D puzzler originally released as a mobile exclusive on the App Store for iOS and Google Play for Android devices, where the first nine levels are accessible free of charge, with an in-app purchase available to complete the game. For the upgraded PC version, the game has been given enhanced graphics, a voice-over to guide you, and two extra levels with additional gameplay not found in the original.

Faraway: Director's Cut is available now on Steam for Windows, Mac and Linux. If you like what you see, there's plenty more where that came from, with five sequels already released, though for now still only on mobile devices. 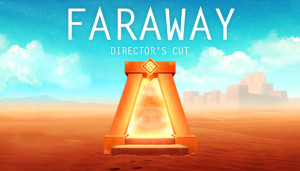