A place called "Whateverland" might sound like something to simply shrug off, but not when it's the name (and location) of the next point-and-click adventure from the creators of The Great Perhaps.

The game stars a "skilled thief" named Vincent, who unwisely decides to "steal a precious necklace from a mansion of a lonely old woman named Beatrice." Little does he know that Beatrice is really an "ancient powerful witch," and when she catches him in the act she banishes him to the "parallel world she has created." Once trapped in this "prison for lost souls, where everyone gets what they truly deserve," Vincent "teams up with a weird guy named Nick" and together they must attempt to find a way out.

As with the developer's previous title, Whateverland is a stylishly hand-painted third-person adventure. In place of its predecessor's time-hopping element, however, this game promises a "branching dialogue system, non-linear gameplay, various endings and unique in-game turn-based strategy sport simulator" called "Bell & Bones." Caligari decribes this tiled-based board game as "a child of rugby and quidditch, that desperately wants to become chess." You can also expect other minigames along the way, and if you wish you can use your expertise as a thief to "steal stuff. Or not – it’s your call."

There is no firm release date just yet, but Whateverland is on track to be launched on Steam for PC sometime later this year. 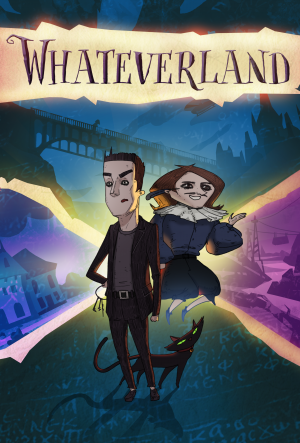