Described as a "spin-off prequel" of Munzesky Games Studio's Sol Invictus, the game is set during the 23rd century, at a time when the solar system has been almost completely colonized. Conditions are somewhat dystopian, unfortunately, as "lawlessness and corruption are rampant" and "feeble governments of the fledgling colonies are powerless to address this problem." Human augmentations have been banned, but "illegal adaptations thrive at the farthest edges of the system," while the "emergence of [a] rogue AI has further complicated matters."

Against this backdrop, The Heist takes place on the planet of Ganymede, "the first colony ever established in the Jovian sector by a powerful Yusein-Takeda corporation." Here a "group of self-proclaimed 'freedom fighters' want to change the status quo in society by stealing a technological prototype." Four members of this group, including a "team leader, field operative, female spy, and hacker," must attempt to break into the company's research facility, and "each character will face different challenges and will have to overcome them with a different approach." In the case of the hacker, this will mean a "completely different playstyle" altogether.

While the setting and story are very much part of the Sol Invictus universe, the black and white graphic novel aesthetic and "interactive comic" format owes at least as much to the game's co-developer, Gamechuck, whose previous title All You Can Eat was done in a similar style. You aren't simply clicking through pages of a comic, however, as you will need to "explore your surroundings by clicking on interactive objects, combine items in the inventory, and talk to other people to solve puzzles and further the story." There will a "hacking mini-game in cyberspace" to contend with, and important decisions must be made that will "affect the outcome of the game" and lead to multiple possible endings. A single playthrough should only take about an hour or so, with additional replay value to try different paths.

There is currently no firm release date for The Heist, but it is currently on pace to be released on Steam for Windows PC sometime later this year or early 2020. 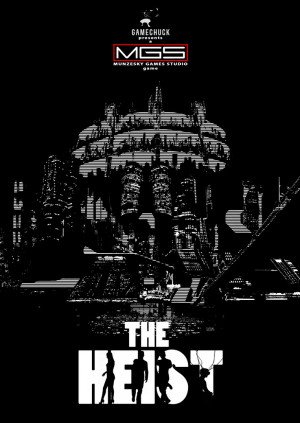 See all games in the Sol Invictus series
Advertisement