The Forgotten City to be rediscovered in 2019

The name Skyrim probably conjures up images of dragons and warriors, assassins and factions, orcs and elves and other familiar fantasy elements. What you likely don't associate with it is a "time travel murder mystery set in a mythological city", but that's exactly what indie developer Modern Storyteller delivered in 2015 with The Forgotten City, a highly-acclaimed Skyrim mod. And soon even those without access to Bethesda's popular Elder Scrolls RPG will have the chance to play it for themselves in a new "re-imagined" version of the game coming next year.

The Forgotten City is set "deep underground in an ancient Roman city," where "twenty-six trapped explorers lay dead because one of them broke a mysterious law." Their fates may not yet be sealed, however, as there's a portal that leads to the past, allowing you to "manipulate the timeline, Groundhog Day-style, so events play out differently. By talking with diverse characters, making tough choices in moral dilemmas, and thinking laterally, you can unlock vastly different endings."

The slick 3D graphics depict a "stunning and intricate city" that players can freely explore as they attempt to "investigate a dark, gripping mystery full of twists and intrigue." With your choice of gender, race and backstory determining the protagonist, within the city you will find yourself "interrogating its living inhabitants, solving environmental, inventory, and dialogue-based mini-puzzles to try to solve the giant over-arching puzzle: who or what is about to kill everyone, and how do you stop it from happening?" The latter is also up to you, as you can choose so "solve problems your own way, with reason, charm, bribery, stealth, threats, violence – or cleverly exploit the time-loop." (Combat is optional, and according to designer Nate Pearce is "definitely not the main focus of the game.")

If you're among the 1.7 million people who have already played The Forgotten City mod, there will be plenty of reason to revisit it, as the updated version promises to include "all the elements you know and love while improving every aspect and adding plenty of surprises. Walk the streets of a brand new city. Get to know re-imagined characters. Sink into original lore with fresh twists and endings. Enjoy added combat and wall-climbing mechanics, an all-new orchestral score, professional voice acting, and motion capture animations."

There is no firm target date for the new, improved commercial version of The Forgotten City, but the game is currently on track to release on Steam for Windows PC sometime in 2019. In the meantime, you can learn more about the game and follow its progress through the official website. 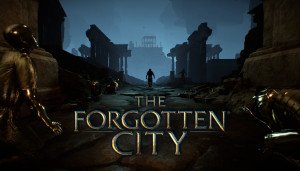