The game stars Captain Jake Hunter and his robotic pal FU-2 as they "blast their way across the galaxy in search of fortune, vengeance... and Bathari icecream." As they travel from planet to planet aboard their eponymous vessel seeking excitement and glory, the two mercenaries also attempt to track down Jake's nemesis Vandros, the "leader of the evil mining corporation, Conglomocorp" who was responsible for the death of his friend Angelica.

Presented in charmingly deliberate "old-school low poly 3D graphics," Mercury Blue is a traditional third-person point-and-click adventure at its core, but with some additional arcade elements to spice up the action. Players will control both Jake and FU-2 at times, exploring various environments, solving puzzles, laughing at fart jokes and other assorted gags, and meeting "crazy characters" along the way. Occasionally, however, you'll need to arm yourself for a little first-person shooting, though such sequences are meant mainly to inject a little excitement and variety rather than pose a particular challenge to one's reflexes.

If you like the sound of an intergalactic adventure, you will soon be able to check it out for yourself as Turbo Chimp is currently putting the finishing touches on a playable demo to be released soon. That should help tide you over until the end of the year when the first of five full episodes of Mercury Blue is launched for Windows PC. You can also learn more about the game through its official website. 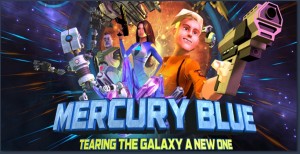