What if you were destined is to become a hero, but were held back by a crippling fear of heights, of danger, or even of being noticed? Indie developer Librarium Studios aims to answer these questions and more in the recently-released puzzle-adventure, The Müll Littoral.

The Müll Littoral is a one-man passion project, developed over a period of three years. Born out of the designer's life-long personal background of helping others deal with clinical anxiety and depression, it is inspired by the strength and determination shown by those who suffer from these conditions. The game is set in the same fictional fantasy world as the studio’s previous game, The Eigengrau Menagerie – a world where thoughts and emotions affect your surroundings, populated by fantastical creatures such as the Thoughtforms, great beings made of thought who guide the world and give aid to the player.

In the context of the game, anxiety and depression are represented as a curse mortals can be stricken with, and the only way to rid oneself of the curse is via a series of great trials. This is to signify the immense struggle people suffering from these afflictions go through simply to live their lives in a normal manner. Players take on the role of Juul, a young girl whose mind has been impaired by just such a terrible curse. Juul is joined on her journey to find a cure by the Elder Pilgrim Glasswalker.

Gameplay in The Müll Littoral is more akin to a series of puzzle scenes, each one depicting a specific situation in which anxiety becomes a debilitating ailment. Players must survey the situation carefully during a frozen moment in time, then restart the flow of time and manipulate objects in their environment in a specific sequence to achieve a desired effect. Scenarios include situations where Juul must attempt to flee from a monster, try to leave a tavern unnoticed, or avoid harm while falling from a cliff. Nearly all of the distinctive art assets used in the game are drawn on paper by hand before being scanned and animated in-game.

Available now for Windows and Mac on itch.io, players can expect The Müll Littoral to take an estimated 1-2 hours to complete. For more information about the game, or to freely download its predecessor, visit the developer’s website. 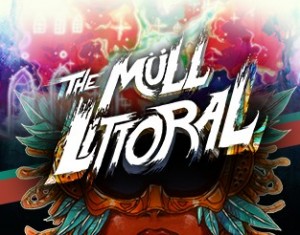