Once upon a time, isometric pixel art graphics were the exclusive domain of the RPG. But given the popularity of such titles as To the Moon in recent years, more and more adventures are adopting this style for combat-free, story-driven games. The latest such title is Rakuen, the debut offering from Laura Shigihara which is due to arrive early next year.

Rakuen tells multiple stories centering around a boy who lives in the hospital but is able to travel to a "fantasy world from his favorite storybook." There he requests one wish from the Guardian of the Forest, but he's told that "in order to receive his wish, the boy must complete a set of challenges that revolve around helping his neighbors in the hospital by interacting with their alter-egos in the fantasy world." Among his fellow patients are "a cranky old man who guards a broken music box with his life while complaining that he never gets any visitors; a young woman in a coma whose husband hasn’t left her side in months; a little girl who laments over a friend she was never able to say goodbye to after growing ill." The more he learns of them, the boy "slowly begins to realize that his neighbors are plagued by secrets and struggles that are mysteriously tied to the strange hospital."

Any aesthetic similarity to To the Moon isn't entirely coincidental, as indie designer Laura Shigihara was responsible for writing and singing the song "Everything's Alright" from that game (as well as composing the music for Plants vs. Zombies). Also like Freebird's popular adventure, Rakuen promises a "heartwarming and character-rich story" in which players "walk a mile in everyone’s shoes as you traverse each character’s life to learn about their unfinished business and help them through it."

Rakuen (the name of the boy's book which means "Paradise" in Japanese) isn't merely an interactive story, however, as it will mix "whimsical dungeons, eerie room escape puzzles, and dialogue-based mysteries that are intricately tied to the story." As you navigate the world via keyboard or mouse, you will also need to "collect items and build friendships to gradually make the hospital a better place", and "go on humorous quests for strange creatures in the fantasy world." Naturally, the game will feature an original soundtrack composed by Shigihara herself.

We don't have too much longer to wait for Rakuen, as the game is currently on track for PC release sometime within the next few months on Steam. To learn more in the meantime and get a sampling of the music we can expect, drop by the official website for additional details. And if you like what you hear, the soundtrack is already available to preorder on its own. 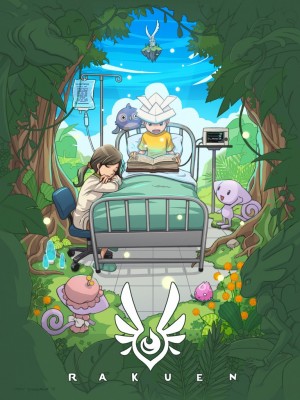