The Piano being fine-tuned for January 2017 release

The thought of tickling the ivories may not immediately conjure up painful images of psychological torment (unless your forced childhood lessons scarred you for life), but that's going to change early next year with the release of the horror adventure The Piano.

The Piano is set in the 1940s and stars a man named John Barnerway, a "failed pianist born to German and American parents who migrated to Paris before the Second World War." When his musically celebrated brothers die, John finds himself thrust into an unwelcome spotlight by the media in search of answers. But John too wants closure on their mysterious demise, and so as he "battles his own demons, he sets out to solve the mystery once and for all – searching the streets of Paris for clues, while navigating the darkest corners of his own mind."

Rather than a conventional adventure, The Piano promises to combine "traditional adventure game storytelling and puzzle-solving with survival horror elements and a haunting, claustrophobic atmosphere." Solving puzzles grants access to "deeper layers of John’s memory", while enemies who wish to conceal the truth must occasionally be warded off if you're to successfully "connect the clues, and solve the dark and harrowing riddle of the Barnerway case." Fortunately, a range of abilities will be unlocked as you progress, "changing John’s perspective on the events unfolding." The game's first trailer shows off some of these elements, as well as the noir-styled, largely black and white 3D presentation.

Five years and multiple iterations in the making (including a previously released "short-form first-person prototype") by indie developer Mistaken Visions, The Piano is not far off now, with a target release date sometime in January for Windows and Mac. 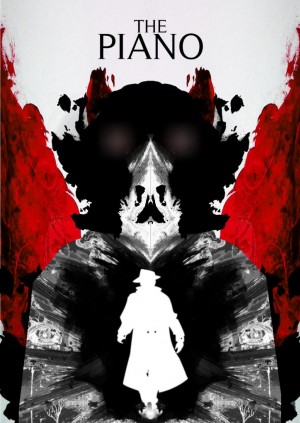