October may be over, but that doesn't mean the end of all-things-horror for another year. The latest to emerge from the shadows is a 3D adventure called Gray Destiny, coming early next year from indie Romanian developer VisualPath Studio.

Players initially control a man named William, who inherits a mansion following the mysterious death of his aunt and uncle, along with the unexplained disappearance of their daughter. What at first seems a blessing may prove to be a curse, however, as upon your arrival you discover that "something terrible" seems to have happened there. As you cautiously explore the abandoned building in an attempt to discover the truth behind the fate of the family, you will need to "solve puzzles, riddles and follow the clues" to proceed, but must also be aware that "you are not alone in that mansion."

As seen in the early screenshots and trailer, part of the game takes place in darkness, with just the beam of your flashlight showing the way, though daytime scenes will be playable as well. You'll also have another source of light that is integral to your investigation, as "there are clues, areas, puzzles, enemies and hints only visible when you use your UV light." The developer promises some "intense scenes" involving Quick Time Events to "evade, counter, or complete an action." However, this will not be the main focus of the gameplay, as your wits will be your primary tool in "avoiding the entity that haunts the mansion." Later in the game, you will have the opportunity to switch between different characters to make use of each person's unique abilities when required.

Gray Destiny is currently being developed for Windows, Mac, Linux and Steam OS. While no firm release date has yet been revealed, the game is on track for completion sometime in the first quarter of 2017. In the meantime, be sure to drop by the official website to learn more. 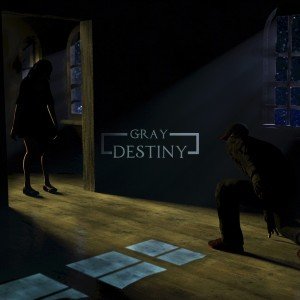