Sofus and the Moonmachine up and running on iOS

There aren't many adventure games for kids, and those that do exist tend to be cartoony edutainment games. Into that void steps Sofus and the Moonmachine, a charming-looking "interactive storybook" from indie Danish developer The Outer Zone that's just been released on iOS, with an Android version soon to follow.

Sofus is the name a little gnorf whose forest world is threatened when a malfunctioning Moonmachine deprives the planet of light. It'll be up to players to "build a spaceship and help Sofus on his dangerous journey to the Moonmachine. Escape the prison of the robot king and survive the Rusty Sea. Find your way through the pipe labyrinth together with the one-wheeled robot Zum-Zum. Repair the heart of the Moonmachine so daylight will shine once more."

Inspired by Nordic fairy tales and games like Machinarium (as clearly demonstrated in the stylish artwork and surreal contraptions) and the LucasArts classics, Sofus and the Moonmachine presents a world "filled with fully animated creatures, robots and gnorfs". Designed for children aged 4-8, the game features 19 different scenes with unique music for each, and a script that includes more than a hundred verses of "whimsical rhymes".

Sofus and the Moonmachine is available now for iOS on the App Store, and is coming soon to Android, though no firm release date has yet been announced. 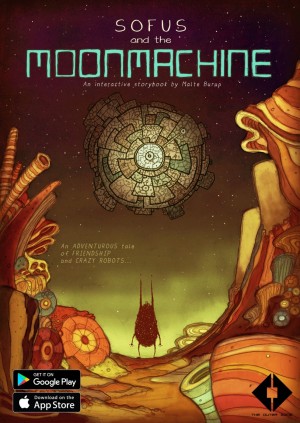