Silhouette steps out of the shadows with first details

Is Dexter up to his old tricks again? Well, no, wrong franchise, but there's another serial killer on the loose who only kills criminals, and you'll be tasked to catch him (or her) in Apeirogon's upcoming adventure Silhouette.

Silhouette puts players in the gumshoes of Detective Jim Grayson, a homicide detective on the hunt for a "serial killer whose motives are confusingly unclear." In the wealthy part of the town of Rutherford, a string of murders have occurred with one unusual detail, namely that "all of the victims were known criminals. Pedophiles, Rapists, Mafioso and Drug dealers." Even stranger is that the killer has "purposely left behind clues at every crime scene that led directly to the next." The police had been able to hide the murders from the press until now, but the front page story in today's newspaper just made your job a whole lot more difficult.

The early screenshots and trailer showcase the game's distinctive 3D graphics, but you can get a much closer look at Silhouette through the 1 GB downloadable demo already available, although the developer notes that it's a "proof of concept" prototype that isn't fully representative of the final version.

The creation of just one man, Peter Ryan, Silhouette is currently scheduled for a two-part PC release. The "Prologue" will debut this fall on Early Access, with purchase at a reduced price including the second installment for free upon completion. In the meantime, to ensure that the game is launched on Steam, you can vote for the game on Greenlight. 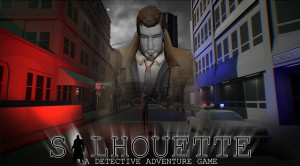