Player decisions are at the heart of Plugged, a new virtual reality-enabled adventure from indie developer Endtimes Studio, and the first is whether to help support the game in its fundraising campaign on Kickstarter.

Plugged casts players in the role of a man who awakens from a "rather weird dream" with the chance to relive the most important moments of his life, all the way up to his inevitable death. In this surreal kind of memory lane, you can make new decisions that will impact your life in a variety of ways. Of course, that means experiencing the consequences of your decisions as well. The first decision, for example, is whether to attend a job interview at your wife's urging or meet your highschool sweetheart in a hotel rendezvous. Each major choice will create two parallel histories that continue to branch the non-linear story in new directions leading to different final outcomes. To see all the different branches, you'll need to replay the game multiple times to experiment with other paths not previously taken.

A first-person title described as a "look-and-click adventure", Plugged is one of the new generation of games designed to make use of virtual reality. With the Oculus Rift, players can "use their own eyes and head movement to solve puzzles", though the game can also be played conventionally on a regular monitor. Either way, you'll navigate free-roaming 3D locations using the keyboard to move and mouse to rotate the camera. Environments promise to be highly interactive, allowing you to "open [a] fridge, wardrobes, oven, drawers, doors, windows, read books, switch lights on and off, etc., all in favor of completing a certain puzzle." Each story branch has one or two larger puzzles that must be solved in order to progress, as well as optional smaller puzzles that will further flesh out the main character's life.

In order to bring their VR vision to actual reality, Endtimes is currently seeking £20,000 by May 30th through Kickstarter. A minimum £10 pledge will get you a downloadable version of the game for PC, Mac, or Linux as early as this July if the campaign reaches its target goal. To learn more about Plugged and support its development, visit the Kickstarter page and drop by the game's official website for complete details. 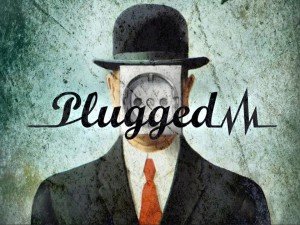