There are plenty of swines in politics, but that notion will take on a whole new meaning in the upcoming comic steampunk adventure Viktor, which is currently raising funds through Kickstarter.

The titular hero is an "impulsive, but a good-hearted boar" who does what any self-respecting tusked pig would do when he loses his job: set out to become the "ruler of the Austro-Hungarian Empire!" Along the way, he will "engage in all sorts of adventures like an airship fight, meeting the love of his life in an anarchist basement, helping Tesla test a brand new incredible machine and lots of other crazy stuff that may or may not involve sex, drugs and classical music."

The road won't be a normal one, but then nothing about Viktor is normal, including the hand-drawn cartoon world in which it's set. Although very similar to our own geographically, "each country is either a semi-historical representation of a real country, or a flat-out parody that may or may not have people laughing with anger." Populating these skewered lands are a number of wacky characters who will "often be bizarre, and sometimes based on real people such as the genius inventor antilope Tesla or the dog Emperor Franz Joseph."

In order to complete this point-and-click adventure (with a few minigames "just to keep you screaming") by December 2015, indie developer Studio Spektar has launched a Kickstarter campaign to raise $10,000 by December 19th. A DRM-free download of the game for PC and Mac is available to backers for as little as $10. To learn more about the game and support its production, visit the Kickstarter page for complete information. You can also download the playable PC demo to check the game out for yourself. 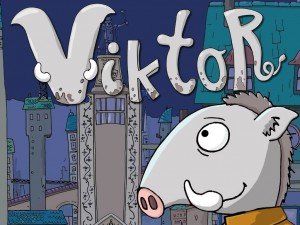