Norse mythology probably isn't the first association that leaps to mind when you hear the word "noir", but indie developers KreativeSpill are looking to change that with their upcoming adventure Norse Noir: Loki's Exile, currently raising funds through Kickstarter.

Despite his headline billing, the god of mischief isn't moonlighting from his Avengers gig here. The game tells the story of a name named Lars, a Norse immigrant living in the United States in the 1920s. Lars was "once a low-level courier for the local mafia famed for his amazing luck", but nowadays he's a struggling street magician who has run afoul of his mafia creditors. He's got just a few days to pay off his debts, but he soon "stumbles across a series of events that leave him questioning himself, his friends, and even the very nature of reality itself. With muscle-bound mooks breathing down his neck and a mysterious pendant that seems to be making him public enemy number one, Lars is going to have to do some quick thinking, fast talking and probably some swift running if he wants to make it through this adventure!"

As seen in the early screenshots and trailer, Norse Noir features a hand-drawn art style the developers hope will set a "light-hearted tone" for their "glimpse into the swing-era United States." Despite the game's serious-sounding subject matter, Norse Noir actually promises to be "comedy-focused" and a "family-friendly adventure title that appeals to all ages." KreativeSpill claim that "the current plan is to implement at least partial voice acting for the game, and hopefully offer a fully voice-acted title if the option becomes financially feasible."

Norse Noir has been conceived as a series of games that will each feature a minimum of three hours of gameplay, and in order to complete the first episode, the developers have launched a Kickstarter campaign for a modest $10,000 by September 20th. A minimum $8 will earn backers a download of the debut episode as early as this November. The game is currently being developed for PC and Windows 8 tablets, but Mac and Linux versions are also being considered.

To learn more about Norse Noir: Loki's Exile and to contribute to the crowdfunding campaign, visit the Kickstarter page for full details. 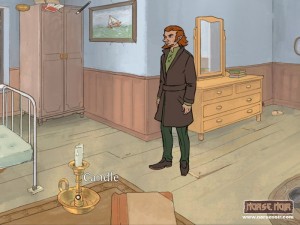