Normally futuristic adventures paint a bleak, overcrowded, heavily mechanized picture of the world. But if you look even further ahead, to a time when nature has largely reclaimed the planet, you just might discover the jaw-dropping beauty of The Realm.

In The Realm's far-flung future, the only humans who remain are "now leading a more simple life based around small rural communities entirely divorced from modern technology and science. The age of magic and mysticism has returned and there are rumours of stirrings in the forests." One such human is a strong-willed young girl named Sarina, who "leaves the safety of her village to embark on a desperate quest to discover a cure for her sick mother." Along the way she meets the "legendary giant stone golem named Toru, a gentle but powerful creature, and the unlikely couple begin a treacherous adventure together."

Players will control both Sarina and Toru, utilizing the unique abilities of each to overcome the many environment-base obstacles and dangers they encounter on their journey. Sarina is "fast and nimble, but her size means that she is unable to perform many of the tasks required to progress." Fortunately, the long-dormant Toru is as powerful as he is slow moving, "impervious to many hazards, and throughout the game he learns new skills and abilities from Sarina." Together they seek a legendary flower in a forgotten city, but "their presence in the city awakens a long forgotten shadowy force that controls the Lampheads - mysterious plant-like creatures with a powerful and deadly gaze."

Created by award-winning UK art studio Atomhawk, in partnership with development studio Lantern Interactive, the game's early artwork shows off the stunning hand-painted 2D environments whose locations "reflect the real-life landscapes and architecture of the North East of England", although obviously much different then they appear today. Atomhawks call this approach "Western Art, Eastern Heart", due to its "blend of epic western fantasy art, captivating narrative and heart warming character relationships, influenced by Japanese creators like Miyazaki." While there are some dangers to contend with, The Realm will include plenty of exploration and traditional point-and-click adventuring, with highlighted hotspots presenting a range of context-specific actions for players to choose from.

According to the developers, they can complete the game in eight months if they're able to meet their fundraising goal of £195,000 goal by May 22nd. Failing to meet their target would be a serious setback, though Technical Director Tom Szirtes claims that given all the time they've already put into the game, it wouldn't necessarily spell the end of the game altogether. But adventure fans can help make that prospect a moot point by pledging. A £10 contribution will provide a DRM-free download of the game for PC and Mac, while upper tiers offer rewards such as a behind-the-scenes documentary, beta version and backer forum access, posters, soundtrack CD, and more.

To learn more about the game and to donate to the campaign, visit The Realm's Kickstarter page for complete details. 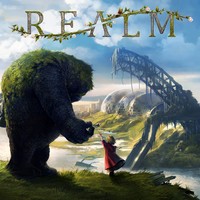