Newly launched comic indie adventure is About to Blow Up

Adventure games may not be particularly hip, but indie developer Facepuncher Worldwide is looking to change all that with the recent release of About to Blow Up.

At Small time Records, the "unbelievably evil hip-hop music manager" named Mr. Sleez refuses to let you join him as an assistant.  With the help of a wise old rat, you decide it's time to form your own company in a "classic 'if you can't join 'em, beat 'em' story, full of shattered dreams, triumphant over-comings, [and] utterly incompetent henchmen", but Mr. Sleez has other ideas, and will stop at nothing to stomp out the competition.

As the launch trailer clearly suggests, About to Blow Up is an "insane hip-hop cartoon adventure jam-packed with crazy characters", but unlike most comic adventures, this game is played in first-person and promises to have plenty of challenging puzzles as well.

About to Blow Up is only the first episode of a planned trilogy, so it's not a particularly long game, but nor is it a costly one, the PC version selling for less than two dollars at sites like Indievania and Desura.  The game is also available for Mac at the Mac App Store.

For more about the game, check out the About to Blow Up website.  If you'd like to actually try before you buy, a playable demo is also available. 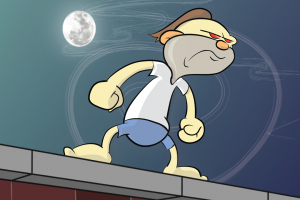