The Rockin’ Dead gets ready to roll into North America

If you live west of the Atlantic and love metal, monsters, and funky 3D glasses, you may have thought you’d be missing out on The Rockin' Dead. But put your fears to rest, music fans, for publisher Viva Media is releasing Grasland Production’s upcoming horror-rock adventure game in North America later this month.

The Deadly Lullabyes are a hard-rockin' trio whose dreams of stardom (or at least a high-paying gig) are boosted when they get an invitation to play a mysterious concert at a remote location. The band sets out in their trusty van but their ambition and travel plans are stalled when the girls crash into some woods out in the middle of nowhere. As Alyssa, the group's leader, you awaken from the accident to find your equipment—and fellow bandmates—are missing. As you set about to find them, you run afoul of some creatures of the night set on stopping you dead in your tracks.

The Rockin' Dead promises over 90 hand-drawn locations, 20 unique characters, and a heavy dose of B-movie camp presented in stereoscopic 3D using Anaglyph images and a standard pair of red-blue glasses. For those wary of the third dimension, the game can be played in standard 2D as well.

If you’re ready to rock out, grab your axe (both kinds) and prepare to face the music, because The Rockin' Dead is scheduled to hit retail shelves on May 31st. 3D glasses included. 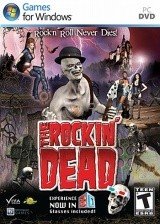 This slipped my radar… I may have to look into it.