Remember text adventures? They're called Interactive Fiction these days, and have continued to flourish in the indie gaming community, though we rarely see any commercial offerings anymore. Recently, however, not one but two new text adventures have been released for purchase, in the form of Textfyre's The Shadow in the Cathedral and Malinche's Saints in Sin City.

The Shadow in the Cathedral is the first episode of a planned "Klockwerk Series", a "steampunk adventure in a world of clocks, gears and ornithopters." In this "Edwardian world with Newtonian devices", players take on the role of Wren, a second assistant clock-polisher with simple ambitions of merely moving up to first assistant. Before long, however, Wren finds himself caught up in a mystery that sees him "confronted by ornithopters, a Difference Engine, a tea machine, a perpetual motion machine, and the mysterious Shadow in Gray."

Promoting about eight hours of gameplay, The Shadow in the Cathedral is available in three different versions: Standard, Hobbyist, and Online, and each is available for $9.95 USD directly from the developer's website, where you'll also find brower-based and downloadable demos to sample.

Malinche is no stranger on the IF scene, having released several adventures over the years. The latest offering is Saints in Sin City, a tale that puts players in the shoes of an elite member of MI-6 charged with protecting Britain's Prime Minister. The luxurious Opimo casino and mega-resort is set for its grand opening in Las Vegas, to be attended by all kinds of powerful dignitaries. This draws the attention of a sleeper terrorist cell, who make plans to destroy The Optimo, killing everyone inside. With orders to use any force necessary and the terrorists expecting resistance, you're headed straight into conflict, and "the day your party checks in to its own set of suites in The Opimo, dead bodies start showing up in parking garages, golf courses and swimming pools all over the 500 acres of Opimo land."

Saints in Sin City is available to download for $29.95 USD at the Malinche website, and a non-interactive eBook version is expected shortly. 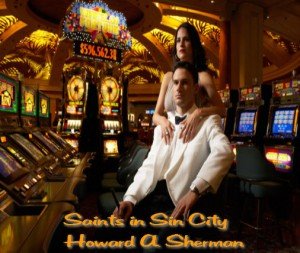