Nikopol sees the light in UK next month

With any exposed secret, once the jig is up, word begins to spread far and wide. Such is the case with Nikopol: Secrets of the Immortals, as today Lighthouse Interactive announced its plans to publish White Birds' latest adventure in the UK and Scandinavian countries in November.

Recently released in North America, this game adaptaptation of Enki Bilal's graphic novels tells the rather surreal story of Alcide Nikopol, a struggling artist in Paris, 2023. A lot has happened in such a few short years, however, as the country is now ruled by a dictatorial regime, the rich are physically separated from the poor, and a giant pyramid-shaped vessel hovers over the city, inhabited by Egyptian gods. When Nikopol discovers that his astronaut father, missing and long believed dead, may still be alive, it's up to players to help him navigate a dangerous journey while "caught between two worlds... one of anarchy and one of immortality."

Although few details are currently available, be sure to check out Lighthouse's official product page for additional information. 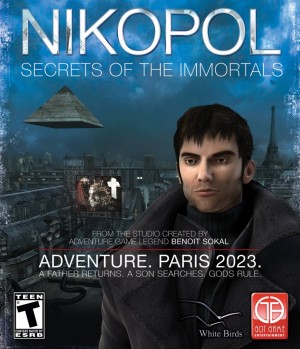