»   Home  /  News  / Perry Rhodan launches into North America this May

Perry Rhodan launches into North America this May

When an adventure based on the popular German science fiction series, Perry Rhodan, was first announced last summer, the chances of the game being published in territories outside of its native country seemed uncertain. Fortunately, today comes the welcome news that Viva Media will be bringing The Immortals of Terra: A Perry Rhodan Adventure to the North American market this spring.

The weekly Perry Rhodan stories have been written by numerous authors over the years, and are very popular in Germany. The first adventure starring the famed astronaut features an all-new storyline, however, and will center on Perry's search for his missing girlfriend, Mondra Diamond. In 1346 New Galactic Era (4934 A.D.), the center of world power has been overturned and Perry must find his girlfriend and save the universe while he's at it, never fully knowing who he can trust.

The Immortals of Terra has an expected release date of May 2008.

The Immortals of Terra: A Perry Rhodan Adventure  (2008) 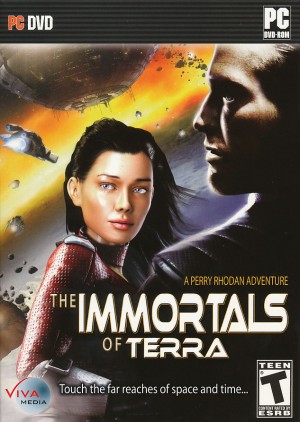