We're just barely past Christmas, but already Sam & Max have moved on to Easter. Easter Island, that is, which is host to Moai Better Blues, the second episode of Season Two that launched today on GameTap.

In the latest episode, numbered "202", an unexpected encounter with the Bermuda Triangle sends the Freelance Police to the land of giant stone heads. Unfortunately, a nearby volcano is threatening to destroy the island, but an ancient prophecy foretells of saviours bearing a striking resemblance to a familiar canine shamus and hyperkinetic rabbity thing. It seems it's up to Sam & Max to save the day again, with either help or hindrance from the island's surprisingly youthful inhabitants.

After one false start earlier in the day that saw the episode released but then retracted temporarily, Moai Better Blues is now freely available to GameTap subscribers. The retail download version will follow tomorrow at the Telltale Games website, either for individual purchase or as part of the full Season Two package. 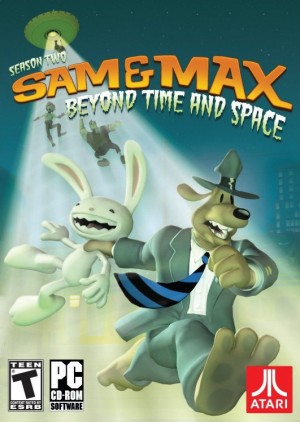