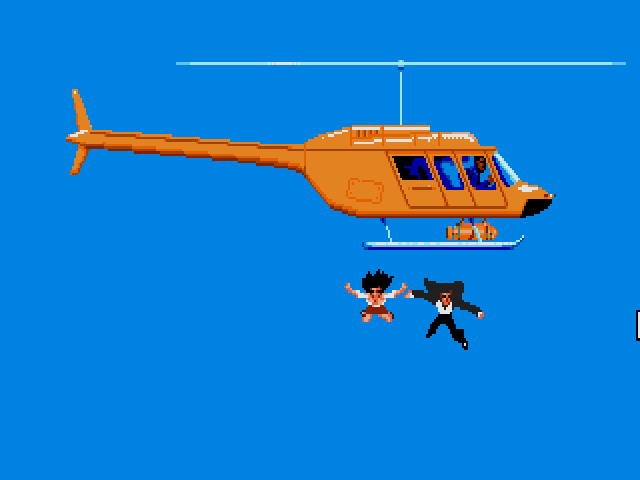 French spy adventure Operation Stealth has many great moments (and some great music), and also some really awful sequences. But above all, it has this, the most obnoxious puzzle of all time.

Let’s recap: this is the very end of the game. You’ve swam in the ocean, avoiding sharks trying to eat you everywhere, to reach the bad guys’ secret base. You’ve made your way through a four-level maze in which you can only see your immediate surroundings and in which giant rats are chasing you. You’ve solved some (pretty fun) puzzles. You survived the big sequence in the control room in which you had to chain several specific (and sometimes far-fetched) actions with perfect timing. And now you’ve escaped from the base by hanging on to evil Dr. WHY’s helicopter. You jump, open you inflatable raft in mid-air, and end up safely on it in the middle of the sea.

And then Dr. WHY drops that big bomb under the helicopter on your head and you die.

Of course, you restore a save, try everything on everything during the three seconds you have before jumping from the helicopter, to no avail. You’re missing an item! It’s not even clear what it is, or where it might be, but you must have missed something. And this is 1990, so you can’t look up the solution on the Internet. And so you start restoring saves from further and further back, examining everything again. (Of course, you could rather do something rational, like smashing your computer to bits with a sledgehammer, but if you’ve reached that point of the game, that’s not how your mind works.)

The item you need is at the bottom of the ocean, concealed behind one of the countless patches of seaweed. Why? Because. You mean the player was supposed to look at every little bit of seaweed for absolutely no reason, while avoiding the sharks at the same time? Obviously! And then replay through the mazes with the rats, the puzzles in the base, the tense sequence in the control room? Mais bien sûr!

I’m not sure what the worst is in all this. The psychological cruelty of the game designers, or that you did end up jumping through all those hoops in order to get your 30-second ending sequence? But I know that if there’s one game that really makes you wish a bomb would just drop on your head here and now, it’s Operation Stealth.