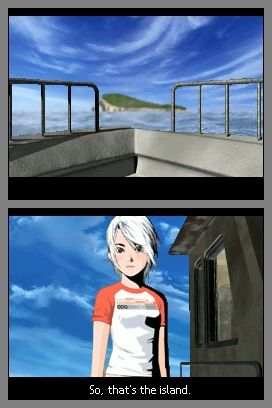 Another Code a.k.a. Trace Memory was one of the first DS games, which I guess is why people liked it so much (it felt very different from “classical” adventures). Personally, I’m not particularly a fan of the sappy story and the gimmicky gameplay, and much prefer Cing’s later games Hotel Dusk and Last Window.

I just finished this, and I wrote a small review in the Last finished game thread in the General subforum, so I decided to crosspost here.

Even more so because this is the only “Another Code” thread there is on the new forums, and no one even bothered to reply to it…

A great title by Cing, and given its release date, the first adventure game to make FULL use of the DS functionality. I mean it has everything: stylus control to tap/slide/nudge/bounce things, blowing/yelling in the microphone and even closing the DS (the most vicious method the DS has to offer) to solve puzzles. It’s the very thing Cing expanded on for their future titles Hotel Dusk and its sequel Last Window. Gameplay-wise it’s top notch.
The story is pretty good, too, despite a pretty redundant “altered memory” plot line near the end. And maybe they should have emphasized solving D’s memories a bit more because I had to play the game TWO times to get the full ending. I had completed Ashley’s story, but I had missed a few items in D’s story (but could still continue) and that gave me an incomplete ending the first time around. That scenario should’ve been avoided, imo.
I also didn’t like the weak descriptions of objects you could examine. Examine a table and all you get is “It’s a table.”. If you were lucky you got a “The table is dusty.”. That’s too little, imo.
But they learned from their mistakes and improved matters for Hotel Dusk, so kudos to them. It’s actually a shame they’re defunct, because they have made a few amazing DS games. They really tried getting the max out of the DS functionalities, and for that Cing should be applauded!