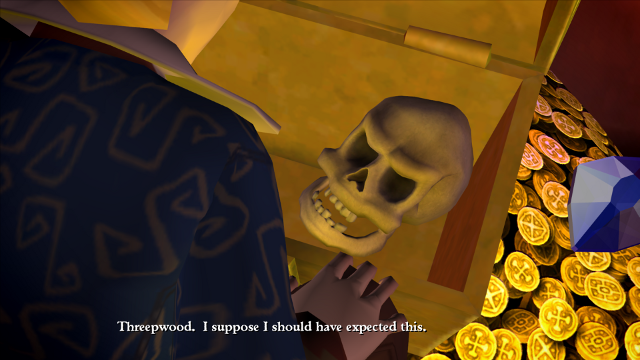 His cameo in MI4 was pretty awful, but I loved everything about Murray in Tales: his dialogue, his relationship with Guybrush, the 3D design… And of course the end credits.

I’ve only played the first two episodes of Tales of MI, so I haven’t met Murray yet.  I’m looking forward to it.

Suggestion: one thread for all Adventure Game Scenes of the Day.

I loved his Appearance (also) with the Closing Credits at the Tales: Episode 3 Lair of the Leviathan,
the comments made over each of the game’s Crew are Hilarious

Yeap, I concur with one thread - also, anyone can post the next scene? I guess it can force people to get up earlier

Fien, diego: I like having a separate thread each day because I always thought of Wreck’s original AGSD threads as a sort of Advent calendar. Every day, at a set time, you would get this little surprise. I loved that; I loved the excitement of seeing a new AGSD thread and wondering what it was going to be about today. If everything is lumped in the same thread, you lose that.

Furthermore, it could get messy if conversations start running for more than a day, as they sometimes did. It’ll be hard to follow who’s discussing what scene.

As for who’s in charge of it: I’m all for having extra people involved, as I’ll run out of ideas at some point, and I have lots of blind spots (i.e. games I haven’t played). But I think there should be some coordination, so that it’s not a rush for who will get to go first, or scenes getting posted at random times — once again, I’d really like to maintain that “Advent calendar” feel.

The worst would be everything in the same thread and everyone posting screenshots at random times, with several scenes on the same day, and none on some other days, conversations going in every direction because people are talking about 6 different scenes at the same time, etc. I would have no interest in a mess like that, and that’s certainly not what I tried to achieve when reviving the AGSD.

Now, if people want to do something different, fine. I don’t have a trademark on “Adventure Game Scene of the Day”. But I wouldn’t want this to get ruined immediately.

I like the way you’re doing it, Kurufinwe.  That way the discussion can be self-contained and about the game.

The end credits of that game were funny as hell.