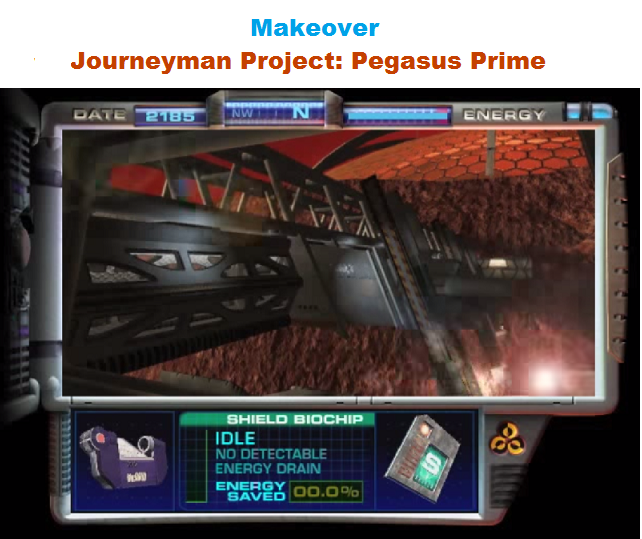 Pegasus Prime (1997/2014) is a remake of the first Journeyman Project game, made available for PC in 2014: Enhanced graphics (still very grainy though), more puzzles, stuff added from a Playstation version which was never released.

I haven’t finished it (yet) but so far I’m finding it much more enjoyable than the original, which didn’t impress me in the nineties and kept me for a long time from playing the sequels.

I did quite enjoy the Journeyman Project series, when it was first released. But I somehow don’t think it would appeal much to me, if I were to replay them now. Not quite sure why though

I like the concept of time-traveling in adventure games but didn’t enjoy the settings and part of the puzzles of JP3.

Would the first JP be worth a try for someone that didn’t like JP3?

Would the first JP be worth a try for someone that didn’t like JP3?

Someone who has played them more recently might be able to give you a better answer, but as I recall it, the three games in the series are very similar, so I would say no!

I played Pegasus Prime last year for the first time, and really enjoyed it. I haven’t yet played the rest but I’d definitely recommend this one.

I really enjoyed the series! Pegasus Prime was originally released for the Mac in 1997, 2 years after Journeyman Project 2 was released. It uses the same actors from JP2. A Playstation port was also released in Japan. A Playstation and Sega Saturn port was planned for the US but never released. If you enjoyed the 2nd and/or 3rd game then you will definitely enjoy Pegasus Prime

P.S. It also has some great easter eggs! One in particular is one that you will either love or hate, a certain someone/something from JP2

I haven’t finished it (yet) but so far I’m finding it much more enjoyable than the original, which didn’t impress me in the nineties and kept me for a long time from playing the sequels.

I never played the original, and perhaps never will, because I’ll most definitely plunge straight into The Pegasus Prime. I’ll be ungrateful bastard for saying this, but I think the original 1993 The Journeyman Project is hurting the series, especially in regard to newcomers - it was a breakthrough and start of the series, yes, but based on fans’ thoughts and critics, it’s also the weakest and unpolished one with some technical problems, some of which were re-painted in Turbo! and then The Pegasus Prime added more stuff like the walking animation, different inventory, puzzles… So, new players will probably think “I’ll start with the first game…”, and then perhaps they’ll never play the sequels.

Actually, like I said in JP3 playthrough, I really think that someone who is starting with the series should play it in the reverse order (ain’t that funny for a time-travel game?) - JP3, which is probably the easiest and most “user-friendly”, then JP2 which is objectively probably the best game in the series, and then pick your version for the first game.