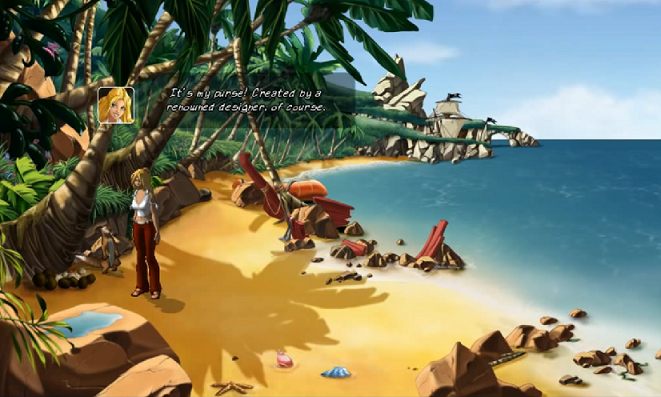 Today writer, designer, and producer Steve Ince turned 57. I chose a screenshot from So Blonde for his birthday because that’s the first game I associate with his name. He has contributed to many other games, in particular the Broken Sword series and other Revolution games, but So Blonde is his baby. Followed by Captain Morgane, which I haven’t played yet.

great game, a lot back tracking, but sweet, only thing that bothered, the loading time of each screen specially with this backtracking, it was a hideous experience, the 1st time I didn’t complain as the magic of the game got me really good, on a reply I got tried half way through.

That’s my type of game.Gorgeous graphic, many interesting, stunning locations to visit. The biggest issue for me was also a lot of backtracking like Advie mention.Game is not easy at all.There was to many situations when I simply didn’t know what to do or where to go.
Captain Morgane on the other hand is really fantastic adventure!Game leads you nicely, and that makes it a very easy but enjoyable game.

I haven’t played it either, but I love the fact that because of us dedicated adventure game fans who are becoming far and wide across this world has brought back many veterans of the old golden days to give it another go! I remember the time when it was said adventure games were dead… but look at the comeback! Especially through the fans who have in themselves risen and created their own games and some leading to their own company! And then the kickstart things to me are such a great way to make it happen even more… if the fans want it they will support it.. in my opinion those are some of the best! no deadline, no one telling you how to do this or that… a chance to make it as u want it to be… just the passion and love for what we all love! a good adventure!

the fans who have in themselves risen and created their own games… no deadline, no one telling you how to do this or that…

Right, but then there are extremes.

the fans who have in themselves risen and created their own games… no deadline, no one telling you how to do this or that…

Right, but then there are extremes.

It’s high time we gave Bracken Tor a proper burial, complete with intricate Barrow Hill rituals. Everybody wearing long flowing robes with hoods. And lots of chanting! I would make a terrific Dark Priestess or Witch.

Barrow Hill is still one of the best games I’ve played, so I’ll wait patiently for Bracken Tor. It’s been in devolopment for only seven years after all.
That means I won’t take part in any hooded night ritual.
I guess Sir LotsofBeard won’t participate too: with a bush like that he can’t come anywhere near torches/lighters/open fire of any kind.

Yeah, Barrow Hill is excellent… in fact it’s been years since I’ve played it. I’ll have to break it back out soon! I just hope we will get to play Bracken Tor, Witchwood Hollow, Blackenrock, and The Last Crown before this hirsute one turns gray. Otherwise I’ll end up joining Karlok which would require a candle on a ten foot pole!