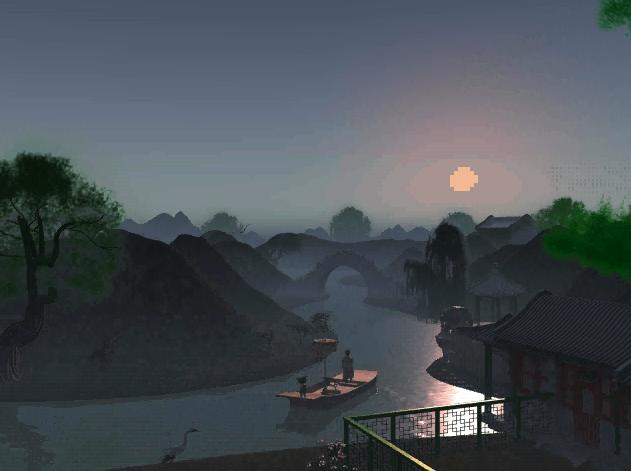 The Legend of Lotus Spring (2000) was released exactly 15 years ago on Valentine’s Day. It’s an edutainment title about a tragic romance. In the screenshot emperor Xian Feng of the Qing Dynasty is on his way to the island in the Garden of Perfect Brightness to find out what happened to his lover Lotus Spring. It’s the only game developed by Women Wise, formed to encourage women to use and create new media with a female perspective. I bet today’s young female players are more interested in a game based on Fifty Shades of Grey, but even fifteen years ago the idea of a sad love story as the “female perspective” came across as cliched and oldfashioned.

The player relives the daily life of the emperor and his concubine, and finds out what happened to her. There are no real puzzles (too hard for girls?), only light casual stuff - watering flowers, lighting candles, feeding birds - which activates cut scenes of the emperor’s memories. I kind of liked the game though. The graphics may look dated now, but they’re still nice. I found it fascinating that I was wandering around imperial gardens that actually existed before the British and the French set fire to them during the Second Opium War. Orders of Lord Elgin. Hey, familiar name! I guess it’s okay to steal and burn down cultural monuments in other countries. Hundreds of acres destroyed and hundreds of buildings lost forever. Kudos to Women Wise for recreating the Gardens on the basis of historical documents!

This is one of my favorite games.  I felt that the characters behaved believably considering the time in which the game is set.  Royal women’s lives especially would have been very circumscribed.  It’s a gentle game, to be sure, but absorbing and very touching in parts.  I remember having a tear in my eye once or twice.

I enjoyed the game, too, and especially liked seeing a way of life I didn’t know much about at the time.  It’s a pretty game, and I’m glad to have played it.  A replay hasn’t been possible, however, because it takes only an old version of Quick Time.