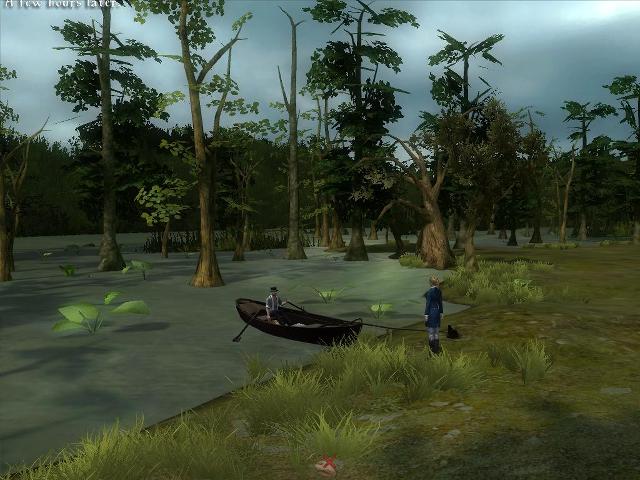 I thought Louisiana Adventure (2012) with its intriguing if simple story, pleasing environments & interesting mechanics had the potential to be a much better game than it actually is.  I enjoyed it anyway & didn’t experience any of the technical difficulties or glitches reported by other players apart from the known crash on completing a piano puzzle. What I did find infuriating was the inability to restart the game without having to re-install it & wish I’d made a game save in the 1st scene.

Um, just curious—how much progress did you lose when you had to reinstall?

Sorry Becky, I worded that badly! - I haven’t tried re-installing the game yet so can’t tell you how much progress is lost. After I finished the 1st part of the game I realised that there was a tad more to it than I originally thought with e.g. trying different conversation choices but hadn’t made a game save early enough to replay the part!

This was one of my most anticipated games at the time, and it disappointed me. I still think it could have been great, with a lot of work.

Maybe you could say it for Moebius, but that didn’t really need as much work to make it a lot better. The plot and concept for BS5 could only ever constitute an ‘above-average’ to ‘quite good’ game, even with its expensive graphics and voice acting, same goes for A Golden Wake, and the latest Carol Reed was just slightly below par in its plot.

I wasn’t expecting so much from Louisiana Adventure & was surprised to find so many good features in the game.

Yes Tim, it’s another game that missed the mark! But I feel that the potential missed in this game was more down to some good ideas rushed through by a publisher & dumbed down to get the game out quickly! (What’s new!)

It would have helped a lot if there had been some background as to why a woman would be employed as an investigator in 1902 Louisiana & what her motivation was?  Also for the player she should have had a better title than Agent Katie! – oh pleease!!!  Also she’s posing as a tourist in men’s attire?????

There’s the premise of a very good story in the game which seemed to be unfortunately ‘drowned out’ by the focus on puzzles & didn’t really flow for me.  I didn’t really care too much for the characters except for the 2 ‘old-timers’ at conflict with each other as they still thought they were in the civil war & the coachman who was a helpful ‘sidekick’.  A bit more background on the characters & a little more fleshing out of the plot would have been great along with on the technical side not leaving most doors open & having the option to ‘Restart Game’!