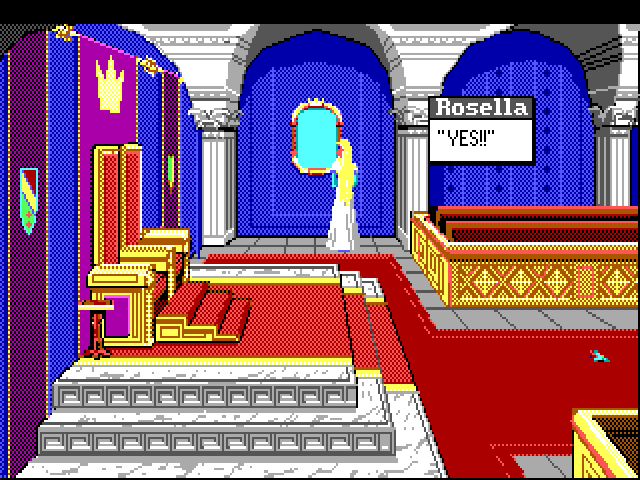 Erm, Rosie, didn’t your parents tell you not to talk to strangers? Making deals with a shady lady in a mirror might not be a great idea. Who knows, you might end up getting swallowed by a whale, chased by a troll in a dark cave and attacked by zombies in a graveyard at night… Just sayin’.

To be honest, when I launched KQ4 yesterday night, armed with my trusty set of savegames courtesy of the Roberta Williams Anthology (what would I ever do without those?), I had no idea what scene I wanted to do today. And then I started watching the intro just to listen again to the fantastic MT-32 score, and there it was: Rosella saying Yes to the mirror and being transported to a mysterious land.

To me, that is King’s Quest: saying Yes to going to a new, magical place, without knowing what to expect, mostly for the sake of adventure (even though she has a strong personal motivation in this case). There’s an innocence and a simple magic to this child-like dream of going on an adventure which, even though it may not have been so clearly present in the first 3 episodes, will forever be the soul of King’s Quest for me.

KQ4 had death lurking around in every scene, but i loved the HUGE area (screens) you can wonder around before Rosella gets to the Castle .

I remember playing this as a child constantly getting stuck or dead and it ended up pissing me off to such a degree I quit.

I was bracing myself for a terrifying horror screen, it’s friday the 13th after all. KQ is the furthest you can get from that, save Ecoquest or Willy Beamish.

I was bracing myself for a terrifying horror screen, it’s friday the 13th after all. KQ is the furthest you can get from that, save Ecoquest or Willy Beamish.

Yeah, me too. Or a scene with the Knights Templar in it.