Protagonist Gary didn’t manage to save himself from the guillotine in GAG: The Impotent Mystery. But it’s not as bad as it seems. His severed head just keeps on talking and tells you: Let’s try one more time. 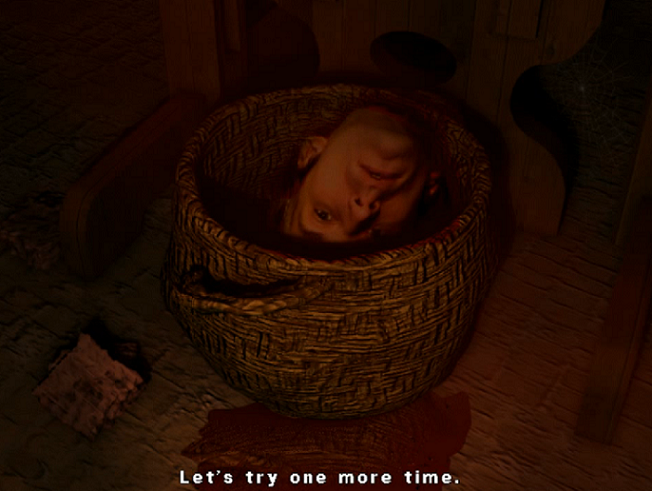 Hmmm… I’ve played GAG (I swear) and yet I wouldn’t recognize Gary in this picture. Moreover, I don’t remember his head being severed and all.
I do remember a guillotine though.

You probably won the spitting minigame the first time.

Oh yes! It’s an obscure Russian adventure game. A parody of many game genres, including adventures, and films too. I watched the ending again at youtube and I learned something from the two guys commenting on the playthrough which I’d totalled missed: the penguin ending is a reference to the great movie Pulp Fiction. Yes! And a pretty good one too.

EDIT: I should add that it has some pretty immature jokes as well. And if you’re interested in playing it, do NOT read what Big Ego Richard Corbett has to say about GAG: he hates it, manages to spoil virtually everything, even quotes a walkthrough extensively! IMO he doesn’t get the simple fact that it’s a parody.

Does a bear $hit in the woods?

P.S. What a fun that playthrough was. I still miss Fien.

It would have been a perfect screenshot to stump everyone in “Adventure game scene… uh, game” thread for months.