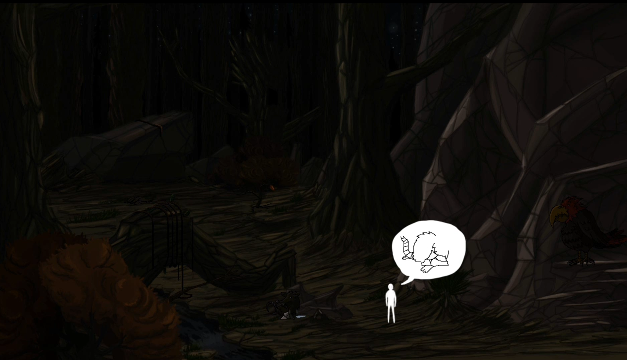 Shine, what shine? It should have been called A Star in a Black Hole aka Pixelhunting in the Dark. I wasted 15 minutes exploring the dark screen and found three clickable pixels which resulted in 1) a hardly visible object (a rope?) in my hardly visible inventory; 2) a bubble with an egg in it, which I interpreted as “find lost egg and give it to the sad bird on the right; and 3) the bubble in the screenshot which is abracadabra to me. At first I was determined to solve my problem. How hard can it be, just one screen? I tried to use the rope. I clicked and clicked everywhere, I stared at the stupid bubbles, I tried to find an exit or at the very least a fourth clickable pixel… until I finally realized that the next screen would bring more of the same. Exit Shine of a Star. Games should be fun. Pixelhunting in the Dark is torture!

You make me feel like TimovieMan (in Wonderland!) with all these new titles, buddy.

This is a classic Samorost-like point and click adventure developed by a small Swedish team of four people using the Wintermute engine, that was a recent winner in the country’s Game Concept Challenge.

Those Swedes really are weird, aren’t they?

Oknytt was made by Swedes too and it was dark too, but I liked it very much.