It is about human emotions and bonding. Featuring remarkable scenarios and unique atmospheres, Murasaki Baby is a fully hand-crafted game entirely designed by hand on paper.

Murasaki Baby wants to challenge convention and move its audience. Our game offers something different based on a strongly emotional game design through which players will live an experience like no other.

Baby wakes up in a weird world, populated by children’s fantasies and fears. Holding a purple, heart-shaped balloon in her hand, she feels lost, homesick and vulnerable. She wants her mommy. Grab her hand and be her guide: here begins a fantastic journey through a dramatic, yet grotesque world made of children’s fantasies and fears, nightmarish visions, peculiar characters, unique environments. 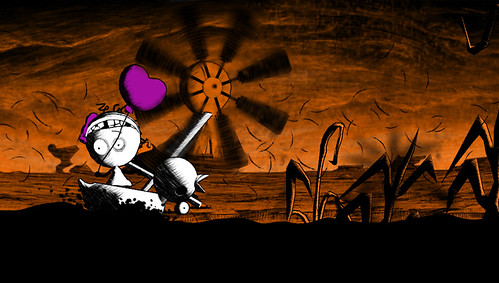 I’ll add that to the stack of VITA adventure games to get. The stack is getting high too.

This game gets released in 2014 and I will get it.

Walking Dead for the VITA just got released and it is a joy to play.

I bought my VITA used for $150 dollars and with great adventure games that use the OLED screen selling for as little as $2.99 it is a must have system for adventure game play on the go.

You’re so, so wrong. Sony has had several awesome-looking games on display and it’s fantastic that this is Vita-exclusive. This is tailored specifically to the Vitas various gimmicks and it looks like a blast!

You’re so, so wrong. Sony has had several awesome-looking games on display and it’s fantastic that this is Vita-exclusive. This is tailored specifically to the Vitas various gimmicks and it looks like a blast!

You are right but i have history of playing point and click on ps1 and ps2,not to mention
tailored made gimmicky games that ended up on other systems.
Its conceivable on iOS, Consoles and PC.

My too bad sentiment is also thanks to abysmal sales of vita and its lineup. I have sold
mine, apart from this and Tearaway, its paperweight.

Want to sell my WiiU too, both are dead systems.

True, it could be fitted for other platforms - especially tablets - but I love my Vita, there’s several new games a month I’m interested in, so this is just a cream dream supreme for me. I guess it all depends on what kind of games you like.

My too bad sentiment is also thanks to abysmal sales of vita and its lineup. I have sold
mine, apart from this and Tearaway, its paperweight.

Needless to say, I don’t share your feelings. Sony has just cut the price and it’s working sales have already tripled - the system with “The Walking dead” (Great Adventure Game) and a 4 GB card is only $199 - a real bargain.

The VITA has many great adventure games already and many more coming. FYI the 3DS sold terribly before it’s price cut and then it became the best selling system out there.

I have 42 games on my VITA already and this generation has years to go before it is finished.

, my point was based on figures not on some hope.

3DS have plenty killer apps (animalcrossing to Zelda), mostly mainstream, not on other systems.

Vita is filled with ports, niche titles, and indies (that are also on other systems).

1) Your chart shows an upswing in VITA sales and does not match your numbers posted.

2) Here is the latest sales numbers:

3) Reviewers are saying that the VITA version of “The Walking Dead” - 2012 Adventure game of the year is the best one to play:

“For anyone who played Telltales great The Walking Dead game, you are getting a stellar port for it on the PS Vita. You are getting the first 5 episodes of “Season 1” as it’s called, and you also get “400 Days” which is an additional episode that was released as DLC in July. I’m not going to review the whole game as it’s been out since April of 2012 and you can find tons of really good reviews on here and other sites for the game content, writing, music and overall design.

For the Vita, this port is solid. I haven’t played too much of it so far, but there is minimal load times, no real frame rate issues or freezing so far. After a load screen the transition into the game there can be a little bit of a frame rate issue but that happens to most games on most platforms. Playing this with headphones is the way to go, the sound design works really well with surround sound on PS3 but since the two front facing speakers on the Vita are just ok, I prefer to be more immersed in the game and play with head phones, which I’d recommend. I thought this game was great on the PS3, but like Rayman Origins, The Walking Dead is perfect for handheld gaming. When commands are prompted you can either use the right joystick to move the in-game crosshairs around or just tap the screen instead of hitting a button. I find the touch screen most useful when selecting which dialogue box I want to select, or when moving the camera, or sliding your finger across the screen to get Lee to walk. The touch screen I think took this game to a whole new level and it’s best to be played on the Vita.

For anyone who played this on the PS3 and wants to replay it, I’d say get it for the PS Vita. For anyone who hasn’t played the game at all, I’d say get it for the PS Vita. It’s rare the a cross platform port gets better on systems it wasn’t originally designed for, but this did. This game shines on the PS Vita, it has everything you loved about it on you main console, but with touch screen implemented and all of the episodes in one cheap, small package, you just can’t do better than this. There are also supposed to be a bunch of new trophies for this version of the game, if you’re into that sort of thing. HIGHLY RECOMMENDED.”

4) I have a 3DS and 54 games. There is no Machinearum, or Walking Dead on the system. Both are award winning adventure games. So I have a VITA.

FYI - I’ve contacted Forum administration and asked that this thread BE CLOSED. We are way off-topic here.

Let’s just get focus back on discussing the game rather than what’s the superior platform. There’s no reason to close the thread, but rather just agree to disagree on PlayStation Vita.

This looks interesting! Will have to pick it up when it comes out. I adore my Vita. I’m so glad I got Zero Escape on it. Wish they’d port the Layton and Wright games, too. With superior resolution and fantastic touch screen technology, those would play well on it.

Indie games like Murasaki Baby are must buy games for me. The touch screen play looks simply fun to me.

Those and “The Walking Dead” are amazing on the VITA due to the touch screen interface:

I sold my PC version of “The Walking Dead” - the VITA version makes the QT events I dreaded a joy to play!

i sincerely doubt that will ever happen… But, the psp has an awesome phoenix wright-like series, dangan ronpa. And if they localize the first two games of that onto the vita, i will seriously consider getting the system. The big problem i have with the vita now is any game i care about on it i could play on a different format. (though i must admit, i am tempted to get the walking dead vita bundle).

I just got this game - it’s quite good and it has some solid reviews:

It uses all the VITA bells and whistles to good effect and has terrific graphics.