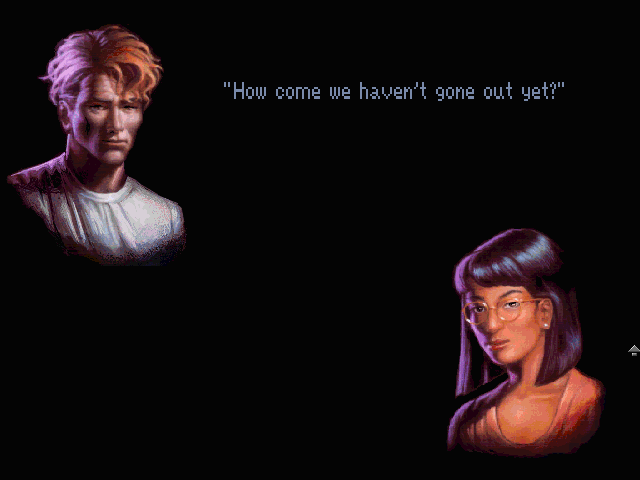 Today is Jane Jensen’s 50th birthday (Happy birthday!), so it’s appropriate we have a scene from Gabriel Knight—and one asking a very apt question: it’s been 20 years!

(My original plan for today was to post a scene from her masterpiece, BeTrapped!, but after looking at a few screenshots from that stupid adventure/minesweeper hybrid, I decided that, even for the joke, it wasn’t worth acknowledging its existence.)

But I really like “the poor graphics and lousy interface” !

Heh. I’m sorry if I hurt your feelings, but that’s the way I fell about GK 1.
I strongly believe that graphics and interface don’t do it justice.

You must’ve been playing GK3;)

You must’ve been playing GK3;)

GK 3 doesn’t excel in those departments too, but I’m definitely talking about GK 1.

I do agree that the game could do with a remake. While I find the interface OK (if a little cumbersome), the graphics, with their mish-mash of poorly-rendered low-res backgrounds and hi-res elements, are horrible and would benefit from being redone. The gameplay could use a touch-up too: I remember replaying the game a few years ago and being boooooooooored out of my mind during the first few days. Plodding through endless conversation trees while waiting for events to get interesting with Crash’s death on Day 4 is not exactly exciting. (And don’t get me started on that mime puzzle!)

I was not bored, the game didn’t start for me with Crash’s death, I didn’t hate the mime puzzle, but the graphics were AWFUL and I threw the game in a corner when I had to solve that stupid clock puzzle in granma’s attic. I couldn’t even make out those symbols!

(My original plan for today was to post a scene from her masterpiece, BeTrapped!, but [...] even for the joke, it wasn’t worth acknowledging its existence.)

I agree about the lo-res and hi-res mish-mash graphics. I kept wondering about why several patches looked great and others were blurry (until someone pointed out a sloppy conversion from MCGA to SVGA graphics)...

I agree with a GK 3 remake (along with some other 3d games like Simon 3d or MI 4) but there are many 2d games with their own charm, that don’t need remakes.
One of them is GK 1. And even if I was annoyed by some things at first, I’ve replayed it so many times that it doesn’t bother me anymore.

I wish someone remade this classic.

Remakes are good but puzzles remaking are really bad,
little of topic : i wish to see how LSL reloaded (2rd remake) would be after AL suggestion that he is breaking all the walkthroughs that were ever made for LSL1 , which means new solutions for every single puzzle .. i wonder if that even possible and not just somekind of big talk for marketing

), but GK1 is one of the rare examples (other being Monkey Island 2 for example) that has the unique art style in mixing “cartoon” and realism. It looks like an old-school comic, and that’s part of its charm IMO. So, if you’re going to remake it, it better be something more than “run-of-the-mill” flashy looking graphics. Also, I think one of the problems is that some scenes, like the store:

(and bring Dean Erickson for it

To me the GK series started and ended with GK1. While it may not be perfect it’s a million times better than the absolutely awful GK2 and 3. GK2 is possibly the biggest disappointment of my gaming youth.

To me the GK series started and ended with GK1. While it may not be perfect it’s a million times better than the absolutely awful GK2 and 3. GK2 is possibly the biggest disappointment of my gaming youth.

How differently we see things!

GK1, in my view, was pants. I got as far as the park (presumably the same park as per Diego’s screenshot) and was bored out of my skull. I could never see the point, let alone the attrction, of the game. GK3 was just a 3D mess. Got as far as a Museum(?) early in the game but the movement gave me headaches and that one bit the dust. On the other hand GK2 I found excellent. Not without its faults, notably that stupid basement door closing at the end, but vastly superior to what went before. It’s possibly because I didn’t get on at all with GK1, and therefore had nothing to look back on, that GK2 worked so well for me.

You’re all mad (except diego!), the graphics are great! Pixellated, yes, but far superior than the newer efforts of Gemini Rue, Blackwell series etc. Not that those examples are bad, but GK is just on another level