I believe that baby girls can enjoy toy trains as much as baby boys.

That’s something I would expect Jazz to say but not you!

Our girl has trains and cars and legos. Anything goes. Especially when they are still so small they have no idea what this weird thing called fashion or trend is.

If it’s for an actual baby and not for a toddler, there’s plenty of fun and safe stuff. Stacking, singing, ringing, rattling stuff

. For a bigger kids just buy anything you think is cool. At the moment my daughter loves the Zhu Zhu Pets.

My daughter is 4 and my son will turn 2 in a few weeks. He has a horrible fixation with anything that resembles a motor vehicle, that has to be the Y-chromosome since we never fed that idea to him ourselves.

Speaking of music, I spent my weekend in Seattle, playing at a folk festival. Playing the sousaphone while battling a nasty cold is intense, I tell you. Yow.

Playing the sousaphone while battling a nasty cold is intense, I tell you.

I heard a rumour* that you have a Hairy Jack Adventure Game in the works, is this true?

*Admittedly started by me, just then, in this thread.

Hrm, never been too fond of “Madam”. We need better gender-neutral honourifics. I’m quite partial to “Ser” these days.

I’m back from my honeymoon in Austria! Best trip I’ve ever made, the country is just stunning!
Seaside vacations are now officially a thing of the past for us, since both me and TimovieWife have fallen in love with the Austrian mountains.
Seriously, taking long walks in the mountains in Austria turned me into a cross between an Asian tourist and Keanu Reeves. Every 100 feet or so, I went 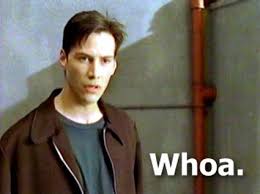 and took several pictures of the landscape…
Oh, and while in Austria, we made a two-day city-trip to Vienna as well, which was nice!

I promise to post some pictures once we get them all sorted (we’re still sorting all the pictures that were taken at the wedding, so it could take a while, though).

Since I avoided the internet while on honeymoon, I’ve got some backlog to get through on the forums as well (hence my apparent absence these last few days). I’ve just finished catching up on the archives, so I’ll be starting with the new forums now.

Also: congrats to Jatsie for killing the Thread™!

I just went to the archived site to have a look around. It feels just like walking around in the City in Uru. A bit weird.

Oh, and about the gift for the baby girl: I’m tempted to buy her this:
http://www.toysxl.nl/p/speelgoed/babypoppen/zapf/sally-pop-63cm-

Could say “knew that already”. I’m more interested in the comfort food group. Are they acting nice because they feel guilty or because comfort food makes them jovial? Perhaps both.

I love the new site, but I hate the new forums.

All the new functionality that the site itself has won, has been lost in the forums.

But it’s nothing I won’t get used to, so

That’s not so nice for Marek to hear.