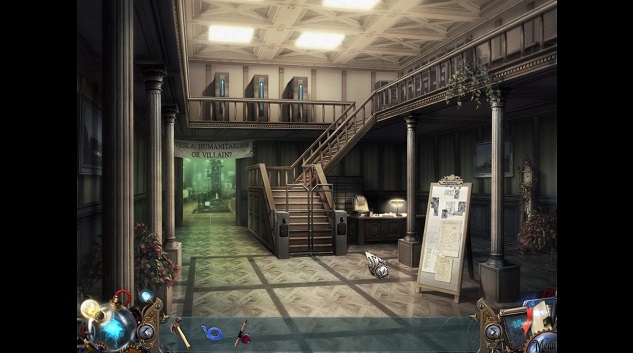 Sorry for the delay. Things got a little hectic around here. When Lady K posts her screenshot, you’ll get a “twofer.”

This screenshot is from Tesla’s Towers: The Wardenclyffe Mystery. It’s a really nice little game with some really great puzzles. I’ve played the game several times, and there is an interesting puzzle toward the end of the game. It’s actually made up of three separate puzzles. You can’t Skip any of them, and you can’t Skip the whole puzzle. It’s also possible to not get it exactly right…even with a walkthrough. So if you fail the first time, be prepared for about two hours of hair pulling because you can’t finish the game until the puzzle is solved.

You play the game as Nikola Tesla’s grand-daughter. (I think that’s the relationship. It’s been a long time since I played the game, and she may be a grand-niece or something.) The title refers to an experiment Tesla planned to illustrate the possibility of wireless transmission of electricity. The experiment was to take place in Wardenclyffe, New Jersey.

Something has gone wrong, and you must fix all of the problems. This involves a fair amount of time travel, which actually plays well with the game’s topic.

Graphics are very well done. Music and effects are top-notch. I would say the voice acting is good, although there is not much of it. There are a number of HO scenes. All are of the random list variety. And, like I said, the puzzles are really good.

If you want to play a game with a little historic reference, you might enjoy this.

I gave the demo a go - I’m not a great fan of games with lots of mechanical/& or scientific gadgets/devices as I just don’t want to go there! But, I was impressed & liked it enough to get the full game. The time-travelling aspect was interesting, I’m not sure of what I was doing some of the time but I enjoyed the game!