Despite some of meh scripts, Bronsan was probably my favourite.

Craig is good, but I’m not too sure on the direction the films have gone under him. They’ve took elements of Bourne.

Names, iznogood, names! This is not the guess the Bond girl thread

He he - I thought everybody would instantly recognize them.

The first is Melina Havelock from For Your Eyes Only, played by Carole Bouquet.
Second is Lupe Lamora in License to Kill, played by Talisa Soto. 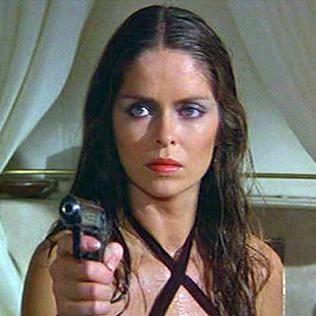 most of the Bond girls are kind of a blur (except Ursula Andress, of course).

It doesn’t help that very few of them manage an actual career after being a Bond girl. You often wind up remembering the character more than the actual actress’s name.

Funny, I find that most of the Bond movies are a bit of a blur, and I have a hard time distinguishing the plot in one from the plot in another - But I can often remember the Bond girls… what they look that is, and their role in the movie, not their names

I second this - this is very true.

Just finished a movie a night on the Bronsan era. Yup, still good fun. Shame he had so few films as Bond.

My favourite bond is Sean Connery, i loved him in Goldfinger, which i think was his best, but did not like him in From Russia with Love, i liked Doctor No, Thunderball,You Only Live Twice and after Goldfinger—Diamonds are Forever is my 2nd favourite, but i must say i also like Daniel Craig

Out of interest, what do other people think of the Bond Reboot with Daniel Craig?

As I stated earlier, I’m not sure on the direction. Daniel Craig is a good actor and I don’t think it’s fair to single him out as it’s what he’s given. I do think they’re fun films, but I don’t really see them in the same way as the other Bond films.

I’ve always been very defensive of Daniel Craig, ever since it was announced he was going to be the next Bond after Die Another Day. I couldn’t stand all the internet whining about how a blond Bond would never work, and how he had flap-ears, and whatnot. They were already brandishing him a bad Bond and they hadn’t seen a second of him as Bond.
I also think most of those people hadn’t seen him act at all. I’d seen several films with him, and especially Layer Cake convinced me that he could nail the role of Bond. The suave part was down pat in that. All he needed to do was bulk up and hopefully look good in a suit, and I was convinced he’d make a good Bond.

And then the first trailer for Casino Royale showed up, and we saw this and this.

And then the film released and most of the criticism stopped.

Except that it didn’t fully stop and shifted towards “too much Bourne influence”. The “Bourne influence” is imo a modern (and frankly, necessary) take on the Bond character. Bond needs to get with the times, and that was what this reboot was all about: keeping the suave attitude, but making the style more no-nonsense, more fitting for a post 9/11 world…

It also helps that Casino Royale and Skyfall are two kickass movies.

Yeah, I never really understood the complaints of Daniel Craig being Bond. My issue wasn’t and isn’t him. It’s more the direction they’ve took his era in. I get they had to move on, but I kinda think it’s took this serious tone a bit too much like Bourne when both a quite ludicrous when it comes down to it.

It’s still good and Skyfall is up there as one of my favourites, I just think it’s lot a bit of its charm.

Yeah, I never really understood the complaints of Daniel Craig being Bond. My issue wasn’t and isn’t him. It’s more the direction they’ve took his era in.

I don’t think you can’t really separate the two.

Actors don’t get to choose what kind of Bond they want to play, but have to play the role the director tells them to play. I’m sure that Craig could have been an excellent Bond, if they hadn’t chosen to remove Bond from the franchise and replace him with some kind of mix between Jason Bourne and Jack Bauer - But they did, and Craig is the personification of that style, just like Connery and Moore was the personification of the Bond of their time.

And Yes, I have seen Craig in other movies where I thought he did a much better job, so it is not because I don’t think he can act or anything like that, I just simply don’t like what Bond and the Bond franchise has turned into.

The “Bourne influence” is imo a modern (and frankly, necessary) take on the Bond character.

Well I disagree, I think it was the easy and the safe choice, but not the best choice. You take something that is already a success and you copy it instead of having to come up with something original. They needed to (once again) modernize and reinvent Bond, but they could have done something original, and in the past they always did, but here they just did what Hollywood always does, and copied someone else’s success.

1) Timothy Dalton (both films could have been better, but the first was brilliantly dark AND charming, which is a tall order following Moore)
2) Sean Connery (I’m not the biggest Connery fan, but he definitely made two of the best)
3) Daniel Craig (I really think he’s much better than he gets credit for)
4) Pierce Brosnan (he would have topped my list if they’d given him Craig’s scripts)
5) George Lazenby (he’d be much higher on my list if only he’d stuck it out)
6) Roger Moore (I actually really enjoy Roger Moore, but his Bond was only occasionally as convincing as I needed him to be.)

And it has to be understood that I consider myself something of a Bond aficionado, who loved George’s work in OHMSS, which is still my favourite Bond film.

All that said, my favourite non-Bond actor who should have gotten the nod is Clive Owen. If he’d gotten the role, I’m sure he’d top my list. Just saying.

Oh yeah, and this all reminds me that I still need to finish writing The Weight of The World.